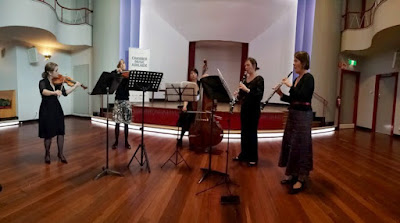 We were in Adelaide for a few days and caught the Kegelstatt Ensemble playing very locally, at Burnside Ballroom. They were seriously satisfying, playing to a small audience of 50-or-so in a heritage '50s ballroom, performing four works in four different combinations, all modern and testy and challenging. There's lots to note, but much of interest was how unknown these players were to me. Adelaide is a good distance from Canberra, so we get few visitors from there. This group was interested in touring to Canberra if promoted - they were playing this program at the Melbourne Recital Centre salon in a few weeks, but that's relatively close.

Like many groups, no doubt. Canberra shares some of the Sydney scene for both jazz and classical, given its proximity, and occasionally the Melbourne scene, given its location on the path to Sydney. I remember a few Brisbane and Adelaide and Hobart and even Perth visitors, but that's dropped away with the diminishment of our music school. So no surprise that I didn't know of this group. But they were interesting and capable. A challenging program of modern works: Schulhoff, Elliott Carter, Ginastera and Prokofiev, and a capable series of players, presumably out of Adelaide or graduates of the Elder Con, some now interstate, playing for the Adelaide and Melbourne Symph Orchs amongst others. And interesting for the techniques of modern works. The Elliott Carter Esprit rude esprit doux was introduced with examples of polyrhythms that suffuse the work and demanded much practice (30-hours for 4-minutes); the example was 6 against 5. I'm amused when I discover the crossovers between jazz and classical, like diminished runs in Beethoven, and polyrhythms are common in contemporary jazz circles. I've attended several workshops on jazz polyrhythms and written them up on CJ (Will Vinson, Ari Hoenig). The Prokofiev Quintet Op.39 was a favourite, six short movements, some rabidly challenging writing performed with lithe clarity. I noticed especially on the strings, which I understand better, and especially from bassist Esther Toh, so sharp and well timed semiquaver runs and capable up into stratospheric harmonics and high thumb positions, and with such a satisfying tone from a determined bow and her modern Italian bass. It all happened in a little decorated '50s ballroom where my mother has danced, red piping with rope features, timber floor, rest bays and an odd inverted-V bandstand with a glowing aquamarine double border. It's the location for the Ballroom Series concerts of Adelaide's CMA (Chamber Music Adelaide). All unknown to me, from Canberra, quite far and in a different arts ecosystem. All worthy discoveries out of this fabulous concert.