A tale of two seats 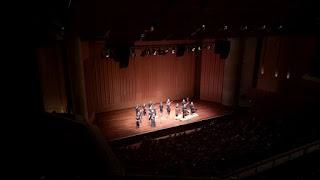 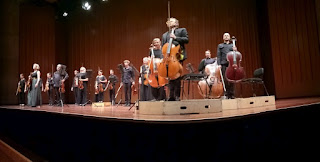 It was the best of seats, it was the worst of seats. Or maybe not. This was the Australian Chamber Orchestra being led by Russian/English violinist Alina Ibragrimova from violin. Megan got given tickets from a friend who couldn't use her seat and I bought another in the back row. Seriously the back row: last row at the top upstairs. I didn't expect too much but the sound was very presentable, full, rich, more so than I've encountered in closer rows upstairs. The wall behind must do it. So I was pleased. Not so much for the Samuel Barber Adagio for strings, lovely as it was and how well played, but it's a non-fave of mine. But I noticed the neat playing, the precise intonation, the common sense of time, the intensity at low volumes, the neat dissonances. So not a favourite but looking very presentable. Then Mozart Adagio and Fugue Cmin. Busy and clear and falling over itself as fugues are. Loved that one. Then Hartmann Concerto funebre. I was non-plussed early but then startling playing, heavenly high harmonics, huge understanding between players and the modern harmonies got me. I was won over. Then interval. I'd noticed empty seats in the stalls, so off to front row. A nice chat with one couple then a search for a seat to view the bassist. I ended up somewhat unaccepted for my intrusion into someone's unused seat (I wondered why) but mightily impressed by the best seat in the house to view bass substitute Tim Gibbs (of the Philharmonia Orchestra [from where, Sydney?]) on bass. (Looking at the ACO website I write this, I reckon that TG was playing the famed 1585 Gasparo Da Salò bass: ACO make a big thing of their valuable and aged instruments). This time I was amongst the players. Watching their eyes and messaging; hearing the individuals; watching Alina herself up close, calm but sharp and quick and energetic in her playing (one player commented on her director's energy as I walked out with him); bowled over by some mighty lines on bass and celli; watching technique and checking string choices (D'Addario Kaplans? silver grey with dark windings) and how he used that bass extension. But the glances and awareness were perhaps the biggest lesson. That's what you see up close, amongst the players. Fascinating for others, too, as confirmed by mates also close and also players. The second set was Arvo Part Silouan's song then the main work, Schubert Death and the Maiden, symphonic in scale with four movements, originally a string quartet (no.14, Dmin) but arranged by Richard Tognetti for string orchestra. This was another stunning achievement. Afterwards Megan likened ACO to Berlin Phil. Another friend said it's the thing he attends before all else. I can see why. Seriously good; obviously our own local piece of world classiness, touching on Canberra every few months. I must include ACO in future bookings. A stunner from either seat.