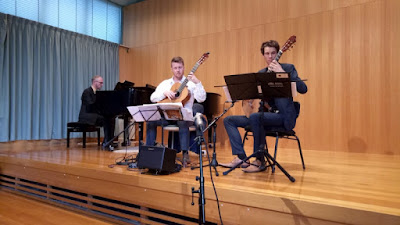 This was Matt Withers and Callum Henshaw performing Rodrigo Concerto Madrigal at Wesley with Anthony Smith on piano. Matt joked that Anthony was their orchestra on the day then went on to invite the audience to hear this work in a few weeks with a full orchestra, in this case, the National Capital Orchestra in Llewellyn on 7 April. I'm in that, so this was a pre-visit/preview for me too. Not that we haven't played it through a few times and listened to other performances. But it's something special and a bit unusual to hear the concerto you are to play, performed in this format by the very people who will lead. It was an eye-opener. I was surprised by the extent of the work (12 movements over ~33mins), but not by its endlessly Spanish character and dancing rhythms and tangy guitar tones. Matt and Callum played well together, looking up for solo lines or ends and starts but otherwise intent of the complex, chordal charts that are guitar scores. Being a string player, I also enjoyed the quick lines of fretted notes high up the neck, especially when the two came together, in harmony or unison or jagged echoes. Guitar is plucked so sharp and so unlike other strings with their genial attacks and long sustains. This is all tack-sharp, cutting, alive and biting as we imagine the tap and snap of Flamenco and other Spanish styles. Looking forward to a night of this with Matt and Callum soon.

PS. Wesley had baked a cake for Bach's 333rd birthday on 21 March 2018 (in preparation for a birthday organ concert that evening).
Posted by Eric Pozza at 12:11 pm