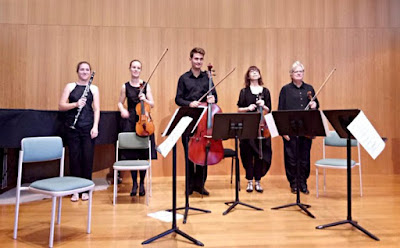 It was a big claim to make (and presumably a playful throw-away) that this was "one of the most beautiful pieces ever written" but it was lovely and the playing was easily up to it. This was a group led by BJ Gilby performing Brahms Clarinet Quintet Bmin Op.115 at Wesley. I left with Pip and she said playing chamber music with friends was the best way to spend an afternoon. I could understand that whether the music is best ever or not. But how nice was this? The gentle interplay of a string quartet with the oddly insistent and unrelenting tone of the clarinet. I hear clarinets often enough but here it was frequent and prominent and that tone was so diverse from the strings: sustained but fatter, rounder, touching on mediaeval I thought. And the playing was lovely, not unexpectedly. Relaxed and easy but done with awareness and care. Barbara is leading us in MdC at the moment and I'm seeing her approach to preparing a group: slowly, highlighting surroundings and other players and understanding how the lines fit together, interweave, respond to each other. Not at all bull-at-gate, take it from the top. The performance was like this. Clear in intent, spacious and ready for changing lines and leads. So, if it was the most beautiful music eva, maybe so, but I just sunk into the pleasure of an afternoon of melody and interplay done with thought and awareness. That's my greatest ever.

Oh a clarinet quintet. I shoulda been there. There's too much on in Canberra to go to everything isn't there.