How good was that 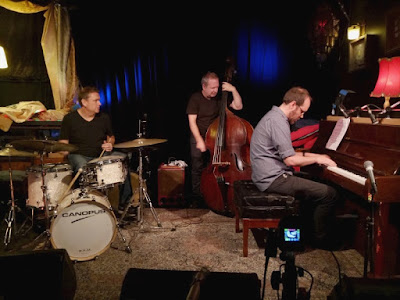 Canberra has had a minor influx of players in the last year or so and we've been well served by it. Barrett, Clarke & Sutton are amongst the best anywhere and we had it, just a trio, mostly playing jazz written by others, but with a level of ability that was stunning. This is Hugh Barrett, Brendan Clarke and Mark Sutton. All three renowned throughout Australia and now resident here. There were a few originals; there was lots of hard swing and passed fours and bass solos and vamps. All the standard take on jazz tunes, but with such facility, such immense awareness and fluidity. I was laid low by Brendan's solos, gasped at Hugh's earlier dissonances developing into flowing waves of notes, grinned at the ease of Mark's telling stories on drums, not least surprised by those extra bars at the end of I remember Hugh/you. They mostly played music by others but the tunes weren't too obvious. There was Coltrane but it was a blues called Just for the love; there was a string of tunes by pianists: Mulgrew Miller, Benny Barron, Kenny Werner, Bud Powell, Stephen Scott; there were a few by Cole Porter and Billy Strayhorn. Hugh provided two: Big staircase and his take on I remember you which easily took the nickname I remember Hugh. And I was floored by Hugh's solo intro to Lush Life: just right, in style and harmony with just a tasteful touch of dissonance with some diminished fills (if I heard right). Floored all round by some incredibly capable playing mixing seriousness with good cheer. Barrett, Clarke & Sutton just floored me. It wasn't totally unexpected.