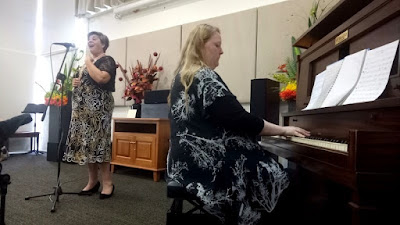 It was gloriously satisfying to hear Louse Page and Sally Greenaway in the cabaret act, direct from the Adelaide Fringe. It was a presentation of about a dozen songs called Louise and Sally do Tin Pan Alley, dedicated to the wondrous tunes that came from that street in NYC, 28th St between 5th and 6th Avenues. I strolled down there once but there's nothing much there now but memories. But what fabulous memories are the great tunes from theatre and film that spread to the world and formed much of the infrastructure of jazz over the decades. The Gershwins, Ellington, Arlen, Kern, Porter. I enjoyed this deeply for the tunes and their outwardly innocent but wickedly playful and aware lyrics but also for the performances. Louise presented with clarity and trained voice as only her training can muster and portrayed every word with clarity and insight. Sally was a dream. She's a composer so she knows alternatives better than most, picks them with wisdom and portrays them with training. I love the bebop turn-it-on-its-head approach too, but Sally could portray the tunes in their original voice then play with them in a clever but empathetic way that floored me, even down to the collapsed dissonances of one tune or the quotes from James Bond or Rhapsody in Blue or a string of tunes built on Rhythm changes, not least the Flintstones theme. I noticed that once before with another jazz gig she did. To some degree, all improvisers compose but not like a composer improvises. Huge pleasure. Then there was the story of the songs, the insertions of a few further inventions of Sally, a take on a Bach Two part invention (no.8, Fmaj) as rag time and an original from her Seven inventions show telling the story of the emergence of movies which works a treat. These are two wonderfully trained and experience musicians doing cabaret with real, deep class. Suffice to say, I was both floored and touched.

Louise Page (soprano) and Sally Greenaway (piano) presented their ode to the great American Songbook and its place of origin, Tin Pan Alley.
Posted by Eric Pozza at 2:02 pm