Poles and the Duke 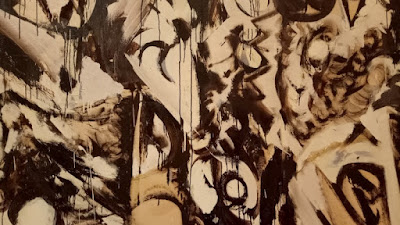 Well may you remember the stir over Blue Poles. It was purchased for $1.3m, a large amount at the time, with Gough Whitlam's approval, and made into an early run at a culture war. How could some drunk spilling paint on a canvas be other than worthless. My kid could have done better. It's a common refrain. I think sometimes it may be true. Maybe there's more concept than craft in modern art.

Maybe. But Blue Poles is now worth a motza (current estimates, cited in Wikipedia, are $100-350m) but it's not for sale. It's considered Jackson Pollock's major work and, after seeing a very similar work at MOMA without the poles, I can agree. In the building its collection, the National Gallery recognised it would not afford lots of old masters, so sought the best of modern works, not least a string of American Masters of the mid-late C20th. The main works are on display together now. Blue Poles, but also names like Chuck Close, Willem de Kooning, Jasper Johns, Lee Krasner, Roy Lichtenstein, Man Ray, Robert Mapplethorpe, Claes Oldenburg, Yoko Ono, Robert Rauschenberg, Mark Rothko, Cindy Sherman, James Turrell, Andy Warhol from styles like Abstract Expressionism, Colour Field, Pop, Neo-Dada and Photo-Realism and Conceptual, Land and Performance Art. I remain a great lover of quattrocento / cinquecento and my favourite here has been for some time, the super realist Bob by Chuck Close. I don't warm so easily to some others (I've written before on Turrell), but it's worth the visit and least as it's free. And you can check out the Prince of Wales (Charles') watercolours on the way in. Convincing with the nature scenes if less so with more demanding forms. But then he could be doing much less admirable and much more harmful things with his time.

The National Gallery is displaying American Masters and watercolours of the Prince of Wales.
Posted by Eric Pozza at 9:51 am