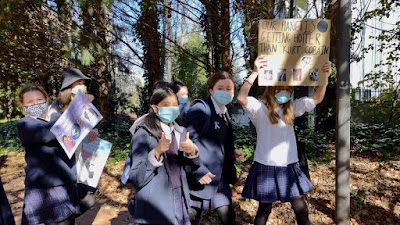 Given the science and the dire implications, I reckon climate change denial and the presumably corrupt climate-related actions of governments should be tried as crimes against humanity.  Them and media.  That they are not is a product of a slowly reacting politico/legal system.  Thus we treat our kids.  There's lots of identity politics in this: any self-respecting radical righty must call out the doctor's wives and latte sippers and take the side of coal, or now gas.  Even those who reluctantly recognise climate dangers must set their goals to avoid economic harm, as they see it, in a short-sighted sense meaning harm to their current mates and influences and media despite immense costs just decades away.  The sensible view is to determine the science as best we can and work to its limits.  Given our delays, net-zero CO2 by 2050 is now inadequate.  Certainly for 1.5degC.  We are currently at 419ppm and we added 2.98ppm in one Covid year May 2020-2021 (https://www.co2.earth/daily-co2).  We once talked of 450ppm for the onset of tipping points.  This is immensely threatening, given fires and droughts and floods, but a topic of derision or evasion by some pollies and some media.  Open a new gas plant, perhaps, to run 9 days per annum at immense real cost.  Who benefits?  Not business because they wouldn't do it.  All costs and no benefits, despite rhetoric, other than perhaps a by-election victory.  But it's the way for Subs and NBN and Robodebt and refugees and more, so non unexpected.  This is what we are leaving our kids.  It will be interesting to watch Australia avoid being in the spotlights at Glasgow COP26.  I can only hope that we are desiccated in the heat: it's already late, perhaps too late given tipping points, but any further delay is catastrophic and confirmatory.  But we've twisted out of our responsibilities before; think Howard and Kyoto.  In the meantime our kids are out, at least some of our kids, and I can only support them along with many others of our earlier generations.  Suffice to say, there were notable numbers of grey hairs on the march and a good few parents.  Not enough, but plenty.  So what happened?  We got together in Glebe Park after many, many email reminders.  We were a moderate number: the news said 300, the organisers 1,000; either way it's not enough.  Marches have little impact these days anyway: think Reconciliation and Iraq war.  There was a band, Post Irony, that played groove and improv with alto, effected bass and drums.  I liked it: school kids from Dickson College.  Extinction Rebellion turned up to lead a Discobedience session to the music of Staying alive.  It started with six dancers, then the kids started up in the audience, then rushed the stage and it was a danceathon.  Great fun.  There was a march to Garema Place and back.  There were some posters but not too many.  One I liked was carried by some girls "The world is getting hotter than Kurt Cobain".  That worked for me; the same line with Harry Styles didn't.  I left feeling happy although desperate.  These numbers won't influence stubborn, ideological, corrupted pollies and media.  Thus we hand over to our kids, with the threat of +2-4degC by the end of the century.  That's just 79 years away: one lifetime.  And just for kicks, they can have overpriced subs, declined industries, obsolete fossil fuel businesses, a slow and expensive NBN, EV-incapable infrastructure, impossible housing prices, tax benefits for various lurks and the rest.  They claim the saving grace is the military goods industries.  God help us. 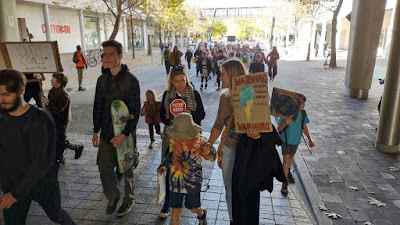 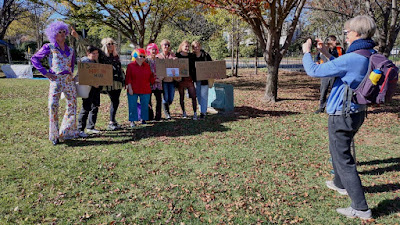 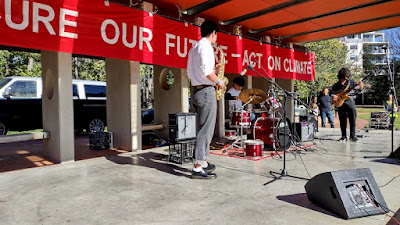 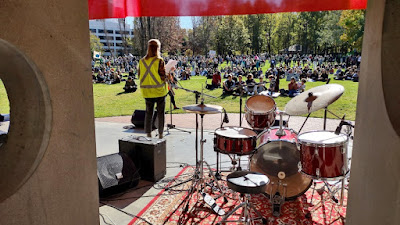 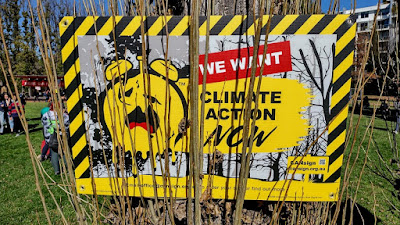