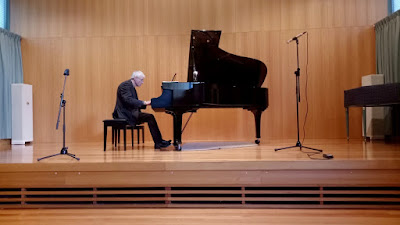 Stuart Long may be quietly spoken but he's anything but behind the keyboard.  He played a concert of C20th solo piano, partly to display the vibrancy of this repertoire.  Certainly it was alive, demanding, strongly rhythmic, varied and harmonically challenging.  For this, read virtuosic.  This was no slouch outing.  I was not the only one dumbfounded at the end.  He played three pieces, but each was a set of smaller works.  Carl Vine Five bagatelles had five works (obviously); Prokofiev Visions fugitives contained 20 much varied works; Ginestra Danzas Argentinas had three.  They were all demanding to play and to hear, much varied in dynamics and feels, and Stuart exposed them with committed approach and intense dynamics, respectful always to the music.  So impressive.  I'm in awe, of the music and the musician.  I wasn't alone.

Would be well worth the flight from Adelaide.