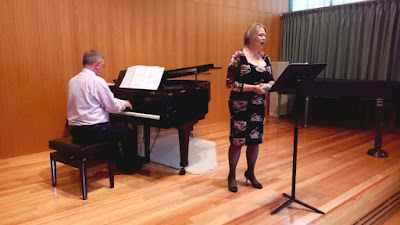 I'm taking on recordings for Wesley lunchtime sessions.  Nice to help out and there are some very capable players to hear.  This time it was two from WA's WAAPA, Helen Brown and David Wickham.  David's in town to study FS Kelly at the National Library.  Helen visited for the week.  I am more comfy with instruments than voice so I could easily hear and see the fine capability in David's accompaniment.  Helen entertained with her emoting the parts which were amusing in themselves and varied.  A string of seven Spanish songs by Manuel de Falla featuring a number of "cross women" (as observed by Helen, after stained cloths, bitter loves and the like) and the piano aping guitar.  Six songs by Septimus Kelly which really showed their age in their deeply melodramatic romantic lyrics by Wordsworth and Rossetti and Byron and the like (I did find these hard to take for the lyrics if not for the music).  Several songs in dialect of the Avergne collected by Joseph Canteloupe, amusingly telling of love and lust and possibly subjects for modern day cancellation.  But I joke.  Helen presented with verve and presence and relevance and a lovely, powerful, telling soprano.  All nice stuff, even if the music seemed somewhat unfitting our times.  As if some times only existed!