Today, so it seems 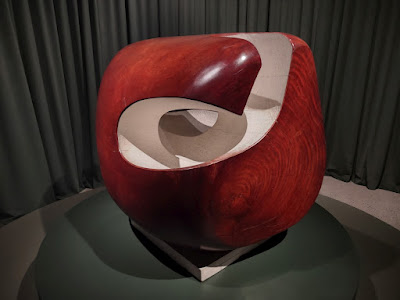 I remember passing the Maton factory then visiting a historical artist colony in Melbourne and roaming about the buildings and coming on a coffin in a chapel (creepy) then ... a room full of people and cameras for the making of a film.  It was perhaps the late-70s.  Good story and its etched in my brain.  So we were off to the Heidi Gallery and I thought it would be that place but no.  Heidi was the home of John and Sunday Reid and a centre for some artists of their era but nothing like the place I remembered.  That was stone (or mud brick?) Monsalvat, also out of Melbourne and somewhat in the same general vicinity, but not a weatherboard residence with no later modernist concrete structure.  And a lovely garden.  So how was Heidi Gallery?  Modernist.  There was an exhibition of works by English female colleague of Henry Moore and doing similar things, Barbara Hepworth.  Mostly stones with holes and perhaps rafts of wires, but also at least one figure.  Then upstairs to paintings of Moira McKenna interspersed with Albert Tucker.  I mostly ignore the Untitled(s) from any artist (if they can't suggest their intent, why should I bother?) but there were some with interesting themes.  AT with St Anthony tormented in the desert and MMcK with a pair of Eine Kleine Nachtmusik and another set in the same location, and yet another with the same upswept-hair woman reappearing.  Then another space with living artists.  One which stunned was a pair of gory photographs of bleeding skin, one cut for each Aboriginal death in custody.  Another featuring holes: cut into photos or burnt into paper or stamped into a big (1.5m?) silver-metal seed pod.  My guess it's a sibling of the huge holed ball outside the Art Gallery of South Australia (and the work promised for outside the NGA?).  These holey items were paired with a 1975 Paris Biennale event, filmed as Conical intersect (see YouTube) where a cone was cut into a C17th townhouse complex due for destruction for the building of the Pompidou Centre.  Then on through the gardens, to the house and some more works.  Thus contemporary arts at Heidi Modern Art Gallery.

Barbara Hepworth and others were on display at the Heidi Gallery of Modern Art in Melbourne.

PS.  Monsalvat was the location for a string of films/series including several in the late-70s. 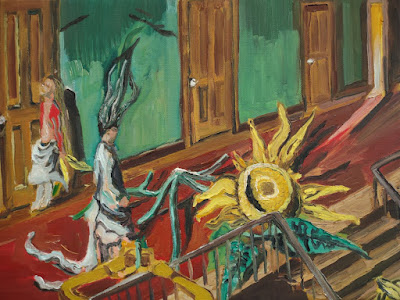 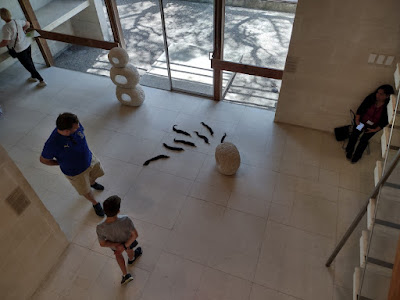 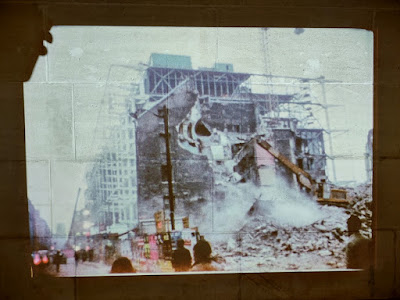