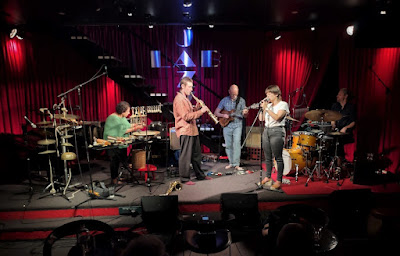 Perhaps a first, a start with solo vocals with Australian bush vocalisations, then drums, soft with mallets and percussion, sticks drawn over skins.  Then vocals changing to grunts and animal sounds.  I remember Ren Walters now, as guitar sounds, drums getting busier, more intense, still mallets, percussion more varied cymbals struck, moody with alto stabs of square intervals, then into flourishes, and bowed cymbal drones, relaxing now, gongs, light cymbals, quieter, still, repeating notes at intervals, sax more pensive, then drums turning to sticks, sharper still, busy, all drums if damped with cloths, guitar sitting back, listening, then all listen on and off, that voice, rabid again with tones of ... what?  Dunno, but busy.  Guitar hints at staccato scales, then slow chords, flattened extensions.  Then open space with those consistent, insistent drums, cymbals edged, suddenly all dirty, simple, loud, slow, that guitar again.  And so it goes on.  Experimental.  Free.  Not always atonal but often enough, but there's ears here, space, animation, variation, quiet or delirium, then that voice again.  And so it continues.  Thinking, glad I didn't bring Megan to this one!  First set was a single improv, then a second set with a break and a shortie.  Interestingly, comprehensible vocals appeared toward the end "I said to Joy / what is your name / since where today / Joy answered me / my name is death delayed / so I made her stay".  Heavy with meaning not just music.  I was overwhelmed by some of the playing.  Drums were overwhelmingly delicate despite intensity (long practice!) and voice was all over with tones and pitch and alacrity (a passage of Japan-like tones in odd scalar 8th note runs floored me) and sax was tenor and alto and soprano and I think sopranino and I loved how standard voicings and intervals and phrasings would appear, although complex and altered, amongst intense flourishes of colour and guitar was sparse then singled noted then colour chorded, only appearing more prominently with volume pedal towards then end (these are good listeners) and percussion added colour but also purpose, as Dur-é spoke to us of the Voice referendum to introduce set 2.  Not a show for the faint-hearted, but intense and authentic and personal.  Hard but enjoyed.