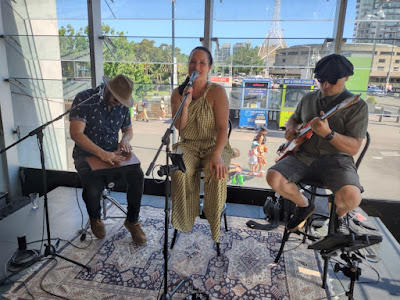 It wasn't particularly jazzy, just an afternoon pub gig across the road from Flinders Street Station in the Transport Public Bar, all modern and open with birds flying through louvres, but the band was seriously satisfying.  A trio of singer, guitar and percussion, advertised as jazz and playing some funky jazz takes on standards, but also a string of R&B/soul songs.  And they carried if off so well.  Georga (soft -g-) Byrne was the main singer and she was fluid and expressive and a lively, jovial host too (I was still awaiting the request Nutbush... when we had to leave). She was supported with occasional harmonies and a few solo vocal songs by percussionist Luke who otherwise played a digital cajon and shakers: effective percussion and a very decent and apt voice.  And new father Mikey Chan was on guitar.  Megan was wondering about the bass lines at one stage and I confidently said they were thumb picked, just to be a little dumbfounded later.  They were thumb-picked, but more complex than I'd imagined.  He dropped E and A strings one octave and played with Joe Pass influences.  The effectiveness of his chordal playing, sharp, punctuated, precise, defined the tunes with huge solidity so eight or so bars of solo sat unimpeded and easily grooving.  This was mightily solid grooves from such a combination.  And the tunes fitted, from Ain't no sunshine and Summertime and Dock of the bay, all funky and grooved, through Fleetwood Mac and Stevie Wonder and Amy W's Valerie and some obscurities (at least for me) like The Weeknd.  Even Beautiful love got a funky take.  So, I liked this trio, great music, lively day, decent beers and some very funky grooves that had a few up dancing and my foot tapping.  BTW, apparently Mikey is musical director for soul singer Kaiit: a good rec.