First of the Gods

Leigh Barker’s Quintet were the first performers in this year’s Jazz Series at the Gods. Leigh and his mates provide a real Canberra ambience at their local gigs. Leigh, the leader and bassist, is a local, as is John Felstead on saxes. But it’s not just the fact of their background, but also the presence of friends and family at his concerts, and the references to the local area, that only a Canberran would understand. Their first CD is called “Off to Moruya”. It’s obviously a reference to the Moruya Jazz Festival, where they regularly play. Apparently, the cover designer was a Melbourne bloke who was intrigued by a grotesqueness in the name, Moruya, so it stuck for the album. Then, there’s the hot swing original tune called Merimbula, another obvious reference to a town and a local jazz festival. But the band is now resident in Melbourne, and apparently is very busy with work there. So in truth this is another homecoming from more successful ex-patriates. 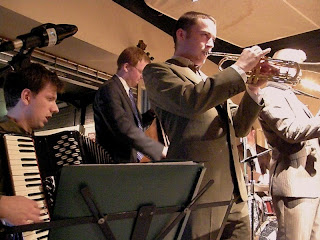 I like this band’s complexity of conception. It’s a real mix. You may hear pre-bop in the rhythm section, cut time on drums, perhaps a gentle swing on bass, along with the sound of French boulevards on the piano accordian, and a bit of modern dissonance on the sax and trumpet. So it’s an intriguing and, to me, unique blend of trad, mainstream and modern styles. And their presentation fits to boot: brown suits, with jackets removed after a few tunes, and rolled up sleeves for the busy end of the night. Leigh even wore braces. Perfect. This is intelligent entertainment. No wonder they have plenty of work. 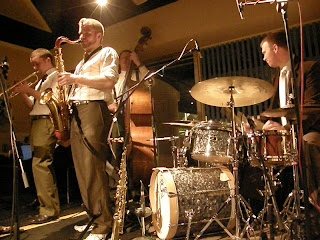 The night started with Ellington’s The Mooch. (I’m sure they started with this at Hippo’s when I saw them, but it’s a perfect, sleezy tune to set the ambience). There was a tune by Heather Stewart of Melbourne, called Music Room, which featured a cut-time reminscent of European films – cute, humourous and deceptively light music. There were several originals by the band, recalling Moruya and Merimbula, If I had a brain from the Wizard of Oz, and a Nat King Cole favourite called Ruby and the Pearl. They raised a chuckle with a tune called “What this thing called, love?”, and ended with a dedication to Bill Frisell (I think I got this right), which surprised me given the style, called In the country with Bill. 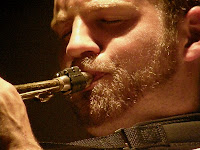 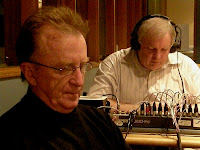 From my modern jazz, soloistic, individualistic point of view, I most liked the solos of the two horns. Eamon played some very satisfying fast lines, and often broke out into dissonance with repeated patterns at chromatic and other intervals. John also frequently dipped into the distorted pool of dissonance, and I liked that. When I previously heard Matt at Hippo’s he played both accordion and piano, and I thought there was more inventiveness on the piano. This time he only played accordion, and the style was not so much jazzy as euro-folk and ambient. I liked this, and it certainly highlighted the uniqueness of the band. Leigh and Al both set capable rhthyms, and did a few nice solos, too.

Leigh’s band plays again at White Eagle on Thurs 14 June, for those who missed this show. ArtSound recorded the concert, so you can also expect to hear the band on radio over coming months. Thanks to Geoff Page for organising the series. The next Gods to visit the Café are Sandy Evans, Toby Hall and Brett Hirst, on 3 July. These are authentic Australian jazz gods, so get there if you can.
Posted by Eric Pozza at 6:47 pm