It was a different Hippo gig that was dlivr-ed last night. This was a fairly gentle pop-funk night from a young Sydney outfit called “dlivr”. It was not unexpected, of course, given their promo as “urban groove fusion”, and a “synthesis of styles including funk, contemporary groove, afro-cuban and jazz”. And it wasn’t out of place, either. In some ways, I felt it suited Hippo’s cocktail-sipping crowd very well. 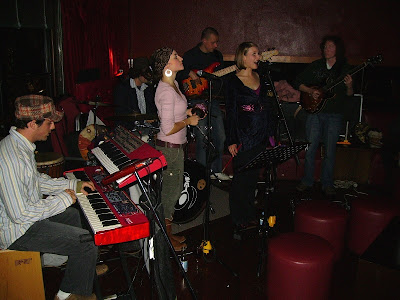 Dlivr started with a leisurely opening and shades of a favourite of mine, Meshell N’degeocello. Then during the night, they sequed into tunes by the likes of Jamiroquai and Roy Ayers’ Ubiquity, along with originals in related styles. So this was bluesy melodies, lots of repeated 4-bar passages for solos, rock drums and funky bass. Certainly not the place for swing, although solos were somewhat jazz influenced and there was some limited dissonance. The band’s obvious feature was a front line of two very capable female singers. I enjoyed listening variously to harmonies and unison lines, and especially to interesting, bluesy counterpoint. And the voices seemed to meld really well. I liked the wailing, sliding vocals, although I sometimes tired of frequent and deep vibrato. The rest of the band was capable, and, from their MySpace site, appear to be surprisingly experienced, having performed the gamut from local stars (eg, the famed Guy Sebastian) and TV commercials, to performing with some major internationals (even Mariah Carey!) I could only stay for the first set. They started fairly tamely, but by the time I left, they were playing much hotter and more smoothly; generally more confidently. I went out satisfied after a feature piece where the keyboardist switched to djembe, an African drum. He actually played it with considerable fluency, and it pleasantly raised the general level of rhythmic complexity.

I would have liked to have heard the band with a decent PA mix, to improve balance but especially to provide breathing space for the vocals. The midrange was a very busy place with lots of parts competing for prominence, and the vocals got a little lost. But it was a capable performance for this style of modern, club music, and it was well received by the audience. But the hats? They seemed too young for them, but Thelonious did it (so it can’t all be bad) and your CJ editor is no fashionplate (so he can’t talk).