The Carl Morgan Trio played live to air today for ArtSound’s Book & CD sale at CSIRO’s Discovery Centre. People milled around looking for a $2 gem. My find was a CD of the Canberra Musicians Jazz Orchestra from the 90s, featuring several names that I’ve mentioned in more recent years on CJ. But the live entertainment on the day was Carl and his crew.

I heard this as somewhat like a superior restaurant gig. The team obviously plays together – they are all current students at the Jazz school - but they still read plenty of the charts, and the tunes were the old standards: Beautiful love, C Jam blues, My romance, Someday my prince will come, and the like. But they had an intelligent, interested, relaxed audience, and they were broadcasting live to Canberra, so they could loosen up, play some more impassioned and altered versions of the charts, and generally be more creative. 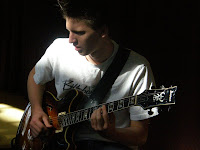 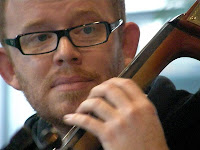 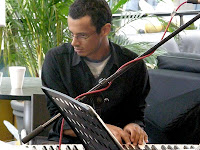 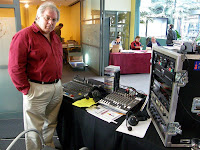 The band was Carl Morgan (guitar), Phill Jenkins (bass) and Ben Foster (piano). Carl played with a more subdued tone than when last I saw him, but still lashed out with plenty of flying runs and dissonant changes. He’s a strong and serious player. Phill laid down reliable and responsive lines. He easily pushed solid walks and defined clear, reliable rhythms. So the groove did not suffer despite the absence of drums. Ben played some intuitively apt accompaniment and comping, some lovely solos and melodies. But what most impressed me was beautifully accurate sense of timing in several styles. I first noticed it on one luscious blues melody about mid-concert and it stayed with him for the following tunes.

ArtSound was broadcasting live from the venue, with a good strong signal given a short distance and direct view of Black Mountain Tower. These guys really are impressive and professional to boot. They would put plenty of commercial outfits to shame: not so much for the great equipment (although for a community station, they are very well supplied), but for their intelligent interests in the local and broader cultural scene.

As for the music, you can take me to any restaurant that offers a background like this. Just don’t expect me to talk too much over the main course.
Posted by Eric Pozza at 4:19 pm