To the Harbour, Darling?

So it was, Megan and I set off for a night in Sydney and a few hours at the Darling Harbour Jazz & Blues Festival. It’s now a Jazz & Blues festival, but it was mostly jazz I heard on Sunday. In this current incarnation, it’s a big, commercial event, so there was a good sprinkling of pop, funk and the like for the punters. Not the intensity and mix of a local festival (like Merimbula which was on over the same weekend), but worthy none-the-less. It’s not Canberra jazz, although there was a Canberra contingent present. Here’s a quick summary of what I heard. 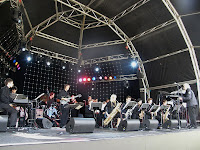 The Con (Sydney Conservatorium) Jazz Orchestra was the first event I attended. It was on the Tumbalong Park stage. This was the biggest and most impressive stage – glorious lighting, fabulous line arrays and masses of power for a crystal clear, punchy, full range, processed and polished sound. Sadly, it was a hindrance to other, smaller stages at times due to the sheer power and spread of the sound, but nice while you’re experiencing it.

The Con band was really impressive. A proudly sharp, tight performance on challenging charts. Tunes included A child is born, Nica’s dream and lesser known big band charts. It was hard to determine who was soloing at times, as the players didn’t stand for solos. The solos weren’t all blow-outs, but the ensemble playing was superb: excellent intonation and articulation. Great show. Loved it. Probably my favourite from what I saw. 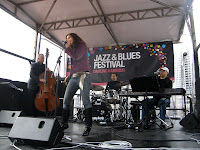 I just passed another stage with the Elizabeth Curthew Quartet, but again no comments. She was singing Without love… as I passed by. Gary Holgate was on bass. 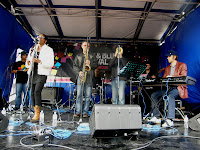 I’d seen Eon Beats Project several years before at another DHJF, and was blown out. EBP was then sax, piano, drums, turntable (?), as I remember. No bass. Fabulous, heavy grooves with a distinctive modern sound. This time, they played a set of pretty standard but capable funk/reggae, and with a more common lineup: Rick Robertson (tenor sax), Phil Slater (trumpet), Jonathon Pease (guitar), Gerard Masters (keyboards), Alex Hamilton (electric bass), Ian Mussington (drums) and Evelyn Duprai (vocals). It was a popular set and showed jazz influences from the excellent players. I loved Gerard Masters on piano, organ and clavinet sounds. Phil Slater and Rick Robertson both played great solos, and Alex Hamilton laid down a solid, great sounding and ever-present bass line on a Fender Jazz, with some lovely slight chordal fills. Evelyn Duprai had a great, black, bluesy voice, which suited perfectly and I loved it. The vocals will give you an idea of the style: “You don’t know what you’re gonna do / you don’t know what you gonna say / you’re wondering how you’ll make it through / I’ve got some questions here today“. Hmm … but then jazz isn’t too highly regarded for its poetry, either. Quality funk with some reggae; original tunes; nice playing; eminently sellable. 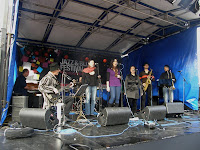 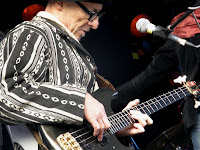 I heard even less of the Jackie Orszaczky Band with Tina Harrod, and thinking back, I regret it. Again, this is not a jazz band in the standard tradition, but it is informed by the style. It’s more a pop-funk band of considerable style, but also with a unique twist: two basses. JO (bass and leader) sits and plays a front line role, somewhat like a guitar, and actually with a tone also somewhat like a guitar: trebly, crisp, chordal, soloistic and essentially cool and relaxed. In back was Alex Hamilton (bass) who had previously played with Eon Beats Project, doing a similar, fat, funky style. Interesting stuff. The rest of the band was Tina Harrod (vocals) and two other female singers, trombone, tenor sax, keyboards and drums. 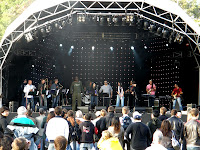 I was intrigued by the concept of the next act, so I left JO early. Perhaps I should have stayed. They were Back on the Block, a Quincy Jones tribute. This was a big and superbly professional set of players on the big Tumbalong stage, with sound to match the reputation of Quincy Jones. But it was essentially a superior pop set and I left after a few tunes. Not to put them down – they were very, very good and proved it with an excellent, driven, distorted rock guitar solo as I was leaving – but not what I was there for, so I departed. 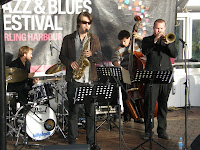 I dropped in on the Eamon Dilworth Ensemble. They were bravely playing away, against a massive barrage of sound which was spilling over from the Quincy Jones show. It must have been a challenge, but I guess it was OK when they actually got playing. EDQ was Eamon Dilworth (trumpet, flugelhorn), Jeremy Rose (alto sax), Rob Turner (drums) and Alex Boneham (bass). I particularly liked Jeremy Rose and his calm presence and investigative alto solos. Next I caught a blast from the past: Crossfire. I remember Crossfire as a very popular touring fusion band in the late-70s. I didn’t remember that they had recorded with Michael Franks, and played with Lee Ritenour and other big names on the Californian scene in their prime. They are now grey haired, with glasses and the like, and have reformed to revisit former glory. And they were still very good. Sharp, interesting playing and original tunes. Worth catching if they visit or when they return to the Basement. The original band members, Jim Kelly (guitar), Tony Buchanan (saxes), Ian Bloxsom (percussion) and Greg Lyon (electric bass), are joined by new members Steve Russell (keyboards) and Scott Hills (drums). 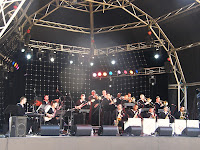 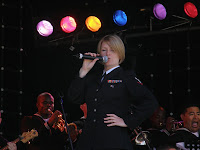 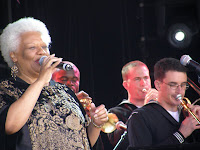 The last gig I caught was the US Navy Seventh Fleet Big Band. I was hanging out to hear a quality American outfit after this Australian music. They were great, as I expected, but nothing to embarrass our locals. Their ensemble playing was sharp and accurate. Some very fast unison sax passages got away from them, but then they were ridiculously difficult, so no shame there, and there were some other unison lines with bass and all the players which came off wonderfully. The solos didn’t particularly knock me out, but they did a great range of styles, with and without singers, and went down really well. There were several modern instrumental big band charts, which were my favourites. But they also did Sinatra with a male singer, Basie/Shuur with a female singer, Glen Miller’s In the mood and the Beatle’s Norwegian Wood, so this was a stylistically diverse set. And they did two songs with the featured jazz singer, Barbara Morrison, who was to feature at the festival later that day: My one and only love, and the blues classic, Everyday I have the blues. BM performed more as a blues than jazz singer for these two tunes: fairly straight with little improvisation, except a nice chromatic line at the end of My one and only love, but she sang with a satisfying, raunchy voice and a great stage presence which was perfectly suitable for this performance.

As for the sound at the event, it was very professional, as you would expect from such a big, commercial gig. On the Tumbalong Stage, the mixing was generally right for the jazz style, although the bass was sometimes unnaturally deep on double bass, rock-loud and overbearing on electric. The horn mix was blissful, with tinkling pianos and guitars and drums coming through fittingly. There was something wrong for the solo horns on the US Navy band – a thin, tin-whistle alto sax tone, and similarly thin tenor – and I heard a buzz in one bass bin on the first day, but otherwise the sound was great. As for the other stages, they were similarly well provided. I was amused by a strong echo on Evelyn Duprai’s mic, but maybe that’s what the band wanted. As mentioned above, there were problems with sound carrying between stages, and John Shand complained about this in his SMH review (“Enough sizzling grooves to warm the brave” / John Shand, in Sydney Morning Herald, 11 June 2007, p. 13). I especially felt sorry for the Eamon Dilworth Ensemble who bravely played on despite a massive background spill from the Quincy Jones tribute band.