About this time each year, the large Jazz School ensembles perform on home turf for family and friends. This year, last night, it was the turn of the Recording Ensemble and the Commercial Ensemble. These are competitive entry bands; they are open to anyone in the Jazz School. Auditions are held each year, and a hot first year can replace a long term player. So there’s an element of pride the outfits, and a go-ahead edge to their performances. This night is like their annual coming out performance. Otherwise, there are gigs at various festivals and a planned recording for the Recording Ensemble, for these students to make their mark and impress outside of Canberra.

The first set was by the Recording Ensemble, led by Miroslav Bukovsky. The band started with a tune written by Miro called 10 Part Invention Blues. Right from the start, we heard the rich tonal and harmonic colours of this orchestrated, recorded style of music. It’s a blissful sound, and is the reason people hanker after bands of this size. It just doesn’t come with small outfits; it’s dependent on capable orchestration and numerous instruments to play the parts. The band played six tunes in the set. There were several written or orchestrated by Miro, including numbers for his band 10 Part Invention and a version of Oliver Nelson’s classic, Stolen moments. Jenna Cave provided a chart dedicated to Wayne Shorter called Little Shorter. The playing was typically competent all round. Carl impressed, as always, with some blistering solos. I took particular note of solos by Alistair, Jonno and Sebastian, but the performance was a group effort, and these weren’t the only notable soloists. The rhythm section was superb. We’re seeing lots of Bill and Ed around town, and there’s good reason. They play well together, they each play with great delicacy and responsiveness, they hold a rock solid steady swing, and they solo with panache. Lovely stuff. 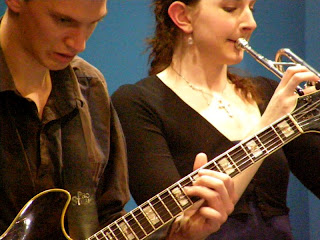 The Commercial Ensemble provided the second set. There was quite a deal of overlap in membership in the horn section, but otherwise this was a different experience. This is the Letterman-style band. Bold and brassy, playing hot, funky charts. Where the Recording Ensemble gives us sublimity and colour, the Commercial Ensemble gives us beat and life. It’s not a matter of better or worse, although it can be a matter of preference. Eric Ajaye leads this band. They started with a great version of Wayne Shorter’s Footprints, with Sophie singing her own original lyrics. This was followed by a funky blues number by Bill Cunliffe with a great unison intro. Then a laid back, New Orleans-style chart by Les Sabrina dedicated to basketball and called Shoot the hoop; a Pat Metheny-style tune (which Eric introduced with a glimpse at the geography of Oregon and Washington State); a hard, funky Bob Mintzer chart called Go-go; a ballad by Matt Harris in the style of Michael Brecker; and to finish the night, a fast latin piece also by Matt Harris, called Bacio innocente. Again, there were capable solos all round, and again Carl lifted the roof. As a bassist, I particularly liked the great sound Stu pulled when playing slap on a Musicman bass, with Eden amp and speakers – smooth and balanced, with a lively but sweet top end. 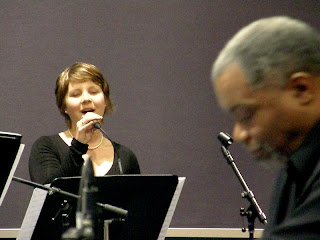 So, a great night of rich and funky playing. I’ll look forward to hearing more of both these outfits over the rest of the year.
Posted by Eric Pozza at 6:12 pm