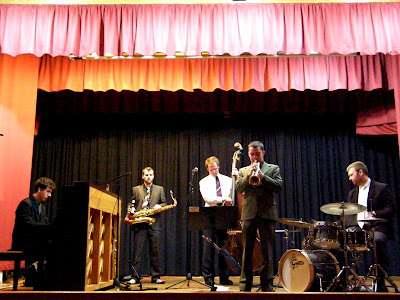 The Leigh Barker Quintet is still in town. They performed last night at the White Eagle. Other commitments meant I missed most of it, including the trio outfit Leigh runs called “The Shieks”. But the last set I heard was impressive, and the performance I’ve most enjoyed from them. It could be the venue, but I think it’s the White Eagle audience. Here musos are performing for their peers, so they are on their mettle, and able to be, and perhaps called to be, more daring or creative or challenging. There’s an atmosphere of goodwill and there’s no hype, but there’s some residual competitiveness, too.

The core intent of the band was unchanged: a melange of modern improvisation and more traditional underpinnings, presented through mostly original compositions (Leigh prefers to just call it improvised music). But whatever the labels, this seemed a more authentic and lively performance then the others I’ve heard. They played a beautiful, as yet untitled ballad with reference to Charlie Haden. It featured some tasty and convincing soloing from piano, sax and trumpet. There was also a hard-bop original called Guts of steel by Al Mcgrath-Kerr with hints of McCoy Tyer in some passages in fourths by the piano. So, a broader range of materials from an increasingly interesting band.
Posted by Eric Pozza at 9:07 am