Here's an exclusive for CJ. Just received in the news room. Lucky Chris. He's done tons for ArtSound, so good luck to him.

ArtSound FM's Jazz Coordinator, Chris Deacon, will attend and represent ArtSound at the forthcoming Montreal Jazz Festival. In a coup for Canberra, Chris has been accredited to cover the festival on behalf of ArtSound, and will provide reports for distribution to Australian community radio. 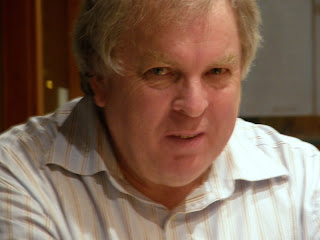 The Festival is simply huge, with over 250,000 visitors expected, plus a blend of music and musicians we do not always have the opportunity to hear in Australia.

Over 11 days and nights, Montreal rolls out the red carpet for over 2,500 musicians from every corner of the globe. From jazz to soul to blues, with detours through traditional music, electro and folk, Montreal conjugates in every style, speaking the universal language: music! North America’s French capital becomes a mecca for everyone from aficionados of pure jazz to fans of all its musical relatives.

The Festival is truly a global event: for the first time, 30 countries are represented at the Fest by roughly 3,000 musicians and street performers. With 500 concerts, including 350 free shows to choose from, some 250,000 tourists come to the City of Festivals every year for musical discoveries. At the Festival, music finds various forms of expression, from the daily Louisiana parade to a marquee event, from an intimate concert or avant-garde set to a major performance from a living legend, from jam sessions to the Petite école du jazz, and from a cruise to a workshop given by a big-name performer or stringed-instrument maker.

The Festival’s indoor concert program alone offers close to 150 shows spread over 15 series, presented in venues throughout the city. As eclectic as ever, this year's Festival will present musicians and music from every region and every source, from the classic to the most avant-garde. Some jazz legends will be there — Keith Jarrett, Bob Dylan, Harry Connick, Jr. and Wynton Marsalis, with his very special project Congo Square — and the music of the immortal Ennio Morricone, reanimated by the stunning The Spaghetti Western Orchestra, all of whom contribute to the magic of the Festival.

Consider, for instance, the presence of artists from the prestigious ECM label including Keith Jarrett, Anouar Brahem, Tord Gustavsen, Nik Bärtsch’s Ronin, and Stefano Bollani, who in themselves represent a diverse range of today’s music. The festival will also welcome Manfred Eicher, founder and president of the jazz label considered one of the most important in the world.

To mark the 10th anniversary of the death of Fela Kuti, Afrobeat will be everywhere: indoors, where his son Femi Kuti will uphold the legacy, along with Afrodizz and Antibalas.

The Festival will also be presenting an exceptional double feature, where culture and music are once again at the core of a superb collaboration: Louisianan Zachary Richard and French artist Francis Cabrel, both equally adopted by Quebec for years, will be sharing the spotlight. This collaboration is the undisputable result of an artistic alliance-turned friendship between the pair. After Hurricane Katrina, Francis was first invited by Zac to collaborate on his latest album for the song ‘‘La promesse cassée’’, of which the royalties helped raise funds for musicians from New Orleans. The two artists also recently performed together in New Orleans and Lafayette. For the Festival, the beloved French artist will draw from his affinity for blues and American music in order to create a unique repertoire for the occasion. Both artists will surely pay each other musical visits! from June 28 to July 8, 2007!

This profoundly unifying event will turn North America’s French capital into a mecca for everyone from aficionados of pure jazz to fans of all its musical relatives.

Apart from ticketed concerts, every day there will be free outdoor concerts, some of which will take the listener around the world! Take for example the Seun Kuti: Afrobeat party with over 20 musicians and dancers, the Arabian Night with Rachid Taha and a rhythmic and colourful concert blowout, the Brazilian carnival bash with Brazil’s Carlinhos Brown.

This is a festival that promises to reveal the full spectrum of jazz in all its vivid individual colours. In short, from the purest jazz to the most colourful hybrid, from the archetypal to the original, this Festival will gather and present some of the greatest living names in jazz!