In the rarefied confines of the Canberra Jazz School a select audience lounged on chairs, elbows resting thoughtfully on tables, heads contentedly on chests. They were select because they were students or teachers fortunate enough to be aware that Alister Spence and his trio performed on Tuesday night. Those who turned up were treated to wistful melody and impressionistic harmony coasting on the waves of an ambient muse. But that wasn't all. 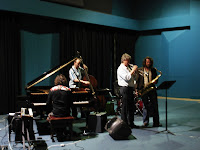 After lulling the audience into sense of dreamland security, the Alister Spence Trio let fly with spin-offs of Monk, atonal conflagrations and funky grooves provided courtesy of the ever imaginative Lloyd Swanton on bass and the versatile Toby Hall on drums. Hall doesn’t treat the drum-kit as a kit – it is a set of percussive instruments placed strategically to allow maximum use of all percussive effects. His intense playing can be studied by drummers and instrumentalists of all persuasions looking to enhance their repertoire of sound and syncopation.

The reference to Monk was an inverted interpretation of In Walked Bud, ingeniously layered and stretched to have the listener wondering “where have I heard that before?” Spence’s influences are classical as well as jazz. He commenced formal jazz training aged 30, and as a late developer, confirms Bill Evans’ assertion that those who mature later have more profound things to say. 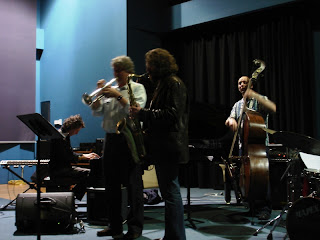 Spence has mastered the genre of the barcarolle, the image of the eternal traveller celebrated by Mendelssohn, Chopin and the poet Coleridge, further developed by Debussy and reaching its apotheosis in Herbie Hancock’s Maiden Voyage. That’s not to say Spence has nothing new to add to this sublime tradition. Knowledge of his predecessors gives him a platform to enlarge the harmonic vocabulary. Only by acknowledging debts owed to the past can one bring an individual contribution to the prow.

Australia is lucky to have Alister Spence continue this visionary journey inspired by the sea. His suspensions flow and build upon each other, he reaches down into the muddy registers of the piano then unfolds a gnarly motif in the middle range, followed by upper crystalline structures. All this while building suspense with careful attention to dynamics.

Spence enhanced the tone pallet by using samples to commence some of the numbers. He also explored prepared piano techniques where the harp inside the piano is plucked or the strings scraped with fingernails. These methods were not overused, but demonstrated the versatility and origins of the piano and the possible directions of modern sound.

It is almost unnecessary for this band to employ singular techniques: they need only rely on their ability and musical knowledge to call forth a torrent of free jazz (which remains accessible and exciting) or meditative lapses into subconscious realms. Hall sometimes uses the sides of his sticks for a more plaintive sound on the edge of the drum, or shorter decay on the cymbals. He even conjured the will o’ the wisp with brushes on a glockenspiel.

Does anything need be said about Swanton’s bass? Comparisons with Paul Chambers, Eddie Gomez or Christian McBride only work insofar as Swanton is an individualist. He can make his instrument sound like a human voice or he can play it like a guitar. As the foundation of trio music the bass must remain solid yet driving: in the frame, but adventurous in order to inspire flights of fancy from the other musicians. Whoever Swanton plays with, he lifts the standard of performance. 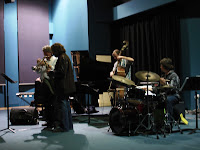 Miroslav Bukovsky and John Mackey joined the trio for the second set. Both were a little tentative at the beginning, but got into stride after the first few notes of their solos. Mackey impressed with some firm and energetic playing and also showed he has command of the mellower sound available to tenors. Bukovsky responded well to Spence’s playing, citing some Hubbard-like drills and punctuations and soaring cadences.

The musicians deserved a larger audience but didn’t seem to mind. However, the Australian public are doing themselves a disservice by not turning up to such good gigs. Perhaps late-notice prevented suitable promotion of this concert. Maybe lack of university resources means there are not enough funds to put into advertising. It’s fine to say that Europe, Canada and the US have an illustrious heritage of artists who inspire the promotion of fine music, but Australian artists will never attain the respect they deserve, nor have more peers to measure themselves against unless governments get off their veritable backsides and do something about it.

That said, this was a most enjoyable evening. The half-empty hall was soon forgotten, subsumed under an ocean of great music making.
Posted by Eric Pozza at 10:38 pm