The beat goes on (Moruya 2) 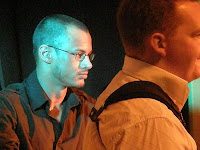 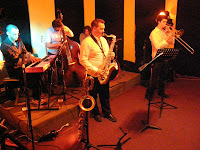 James LeFevre followed Red Barron with a down-to-earth jazz set heavily influenced by down South, New Orleans gumbo. Organ, keyboard effects, bluesy riffs and funky rhythms. Lots of fun, and very impressive. Again, there were originals, at least one by Rob on trom. I particularly liked a Gary Bartz tune, Eastern blues. This was salty music; right for getting the audience moving, and well played. James is organising a tour for this band, so good luck and have fun. James was his entertaining self, both for his patter, and has sax playing. He’s one of few who play the baritone sax, which is always good for a touch of humour with its earthy bottom end. Kane played capably on both instruments, but had the unenviable job of frequent changes. Rob is a stalwart, playing heads and soloing with some panache. Ben is a fabulously clean and capable. This gig featured keyboards and organ, uniquely different keyboard skills and he did the job wonderfully. I loved his ring modulated solo later in the night. It was that type of gig. Evan Dorrian is another upcomer. His drumming is strongly driving and richly interesting. He’s another one to watch. The JLeF Quintet was James LeFevre (saxes), Rob Lee (trombone), Ben Foster (keyboards), Evan Dorrian (drums), Kane Watters (acoustic and electric bass). 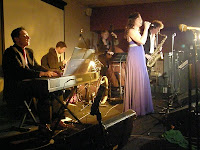 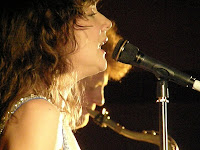 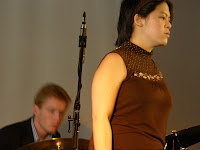 I just managed a few minutes each for the Catherine Hunter Quintet at the Golf Club and Fionna Tamin’s band. Catherine H was supremely professional but pretty mainstream. Not unexpected for these professional outfits: they need to entertain to eat, after all. I heard the gig at the Air Raid Tavern the next night was great, but I missed that one. I didn't hear much of Fionna’s band, but it included some original tunes by Fionna herself, and capable singing. 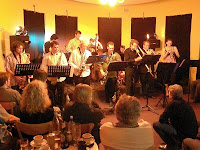 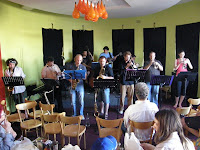 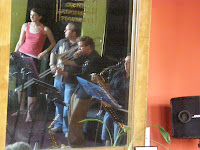 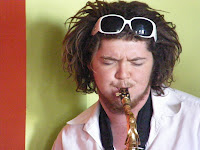 I missed the ANU Big Band this weekend, but I did hear the Recording Ensemble twice, and in surprisingly unusual circumstances. They’re playing a treat, in preparation for the Wangaratta Festival and the end of this year’s band. There was a power blackout for one performance (as Australia sinks to third world, resource dependent status), so we had the unusual opportunity to hear the Rec Ens unplugged. The harmonies were sweet, but it lost a good deal of the verve and vigour, with guitar reduced to chank-chank and the bass struggling to be heard above naturally loud horns. When the power came back on, there was an unruly rush to get Carl Morgan on the job, and play this the way it’s meant to be. I reported on a recent Rec Ens performance, and the charts were largely similar, except a new one by Nick Combes called Portrait of the artist as an angry (young) man. It’s a dedication to James Joyce (obviously) and Charles Mingus (obvious enough when you hear it). I heard it twice in two concerts and loved it. An intro bass solo by Bill Williams is followed by a rhythm set up by the baritone sax, then layered over by various horns. All in blues scales reminiscent of Mingus. Lovely stuff. Congrats to Nick; well done. 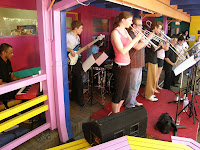 I also caught the Commercial Band. This was their final performance in this incarnation and perhaps that’s why they played with such verve. I had heard of a great performance the night before that I had missed, but this last one excelled. The intro was an extended (60sec+) cacophony of all instruments, leading into Footprints and Sophie Leslie singing her original lyrics. Hot from the top. Thereafter came Tower of Power funk, power guitar, trumpet and sax solos, a fabulously hot rhythm section from Evan Dorrian, Stu McKnown and Ben Foster (let’s face it guys, a rhythm section like this makes it so easy for the rest of you). Eric Ajaye was lounging in the corner proudly surveying his handwork. The day was warm, the band was hot, and the sun was out. This was bliss. Like all things, it had to end, but the next version of the Comms will have quite a reputation to match after this performance. 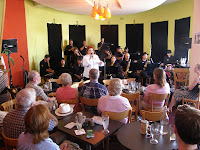 I did just catch one traditional big band: Spectrum Showband. This is a long-standing group of amateur players around Canberra, and a great training ensemble. I only heard a tune, so not enough to comment, but they were sweet and capable and I’ve got a pic.