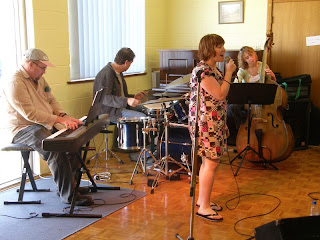 I just caught the end of Madeleine Hawke’s set, and it was fabulous. Attitude is the word for this woman, with her powerful, very edgy but hugely expressive voice. I was sorry I missed the whole set. Madeleine Hawke (vocals) was accompanied by Wayne Kelly (piano), Hannah James (bass) and Mark Sutton (drums). I believe this was the line-up for a CD she recorded recently, so presumably it was well rehearsed. These were just standards, but so beautifully done. Maddy’s voice is powerful and sharp, but she’s also got huge presence, beautifully correct and restrained improvised vocal lines, and huge emotional strength in her interpretations. Wow! The accompaniment was equally stunning. Wayne’s clear, understated solos, Mark’s similarly clear statements, and Hannah playing at her best, with a lovely tone and true note choices. I only caught Comes love and I wish you love, but they were stunners. Catch Madeleine Hawke if you can; doubly so with this backing.

Wayne Kelly appeared several times in different band incarnations. Next was the WK Trio: Wayne Kelly (piano), James Luke (bass) and Mark Sutton (drums). What to say? A blowout! There were standards and originals from Wayne’s CD: some beautifully clear, deceptively simple playing by Wayne; strong, straight-ahead bass and solos by James; sharp, crisp drums from Mark. This is a master outfit; my mates were floored with their performance. He played one standard (I’m old fashioned) but mostly originals: Mr Hank Jones, What’s the number, Mt Condor, Dr Kirkland Blues. From this performance, it’s clear why Wayne is one of our local piano stars. It’s also interesting to hear the change from Wayne’s old trio. The trio with Ben O’Loghlin was cerebral; that with James more lively. Not a change in quality, but in style: interesting. Wayne is regularly out and about, although in various formats. His playing is always a pleasure. 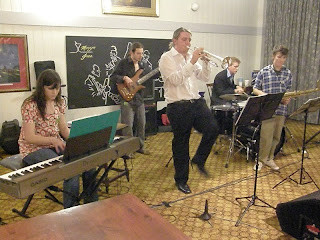 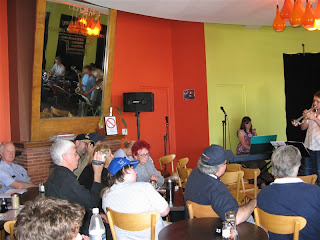 No Standing was the next generation of the Jazz school. Less experienced, but the performance bodes well. NS are Rafael Jerjen (bass), Mark Body (drums), Olivia Henderson (piano), Reuben Lewis (trumpet), Max Williams (tenor). Reuben appeared in several bands during the weekend. Max is brother to the excellent bassist, Bill Williams. He played well expressed solos with real expression. Both Reuben and Max will be players to note. Raf also impressed with real rhythmic strength and involvement. Watch out for these players over coming years. Some are only in high school, so have considerable time to develop, although Reuben is already playing with a range of bands. I heard them a second time on Sunday, although with slightly different members. My impression then was of impressive performance of written parts (accurate timing and intonation on Chick Corea’s Spain and the Brecker Brothers’ Skunk Funk, no less) although leaving some room to improve on the improvisation. But that’s from school kids! It bodes well for the future.