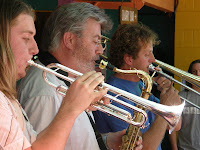 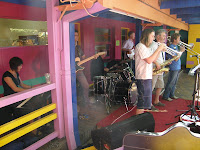 There are still some players, usually older, who survive outside the Jazz school. Turner’s Antidote is a regular at the Moruya Festival. I’d seen them another year, but this year they were a particular blowout. They are a funk outfit, with a 3 part front line and four part rhythm section. Leigh Miller, as ex-Jazz School player, is on bass. I noticed him with some great performances with the Comms a year or so ago. TA were led by Peter Henderson (tenor), with Rod Harding (trombone), Reuben Lewis (trumpet), Wayne Millar (drums), Leigh Miller (bass), Leanne Ballard (piano) and Richard Manning (guitar). This line-up was quite different from that in the program and Peter told me they’d had only one rehearsal, but you wouldn’t know it. It was great, forceful, funk. Lots of fun; lots of volume. And music obviously runs in the family: Olivia Henderson (from No Standing) is Peter’s daughter. 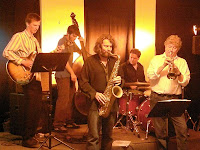 I only caught two tunes from John Mackey’s performance on the Saturday night, but these were hugely impressive, as was to be expected. John Mackey (tenor) was playing with Miroslav Bukovsky (trumpet), Carl Morgan (guitar), Chris Pound (bass) and Mark Sutton (drums). The first tune was a first outing: Tilba by Miro, written in dedication to Carl’s home town. This was a powerful and extended tune. Tilba was followed by a supremely beautiful ballad, with John playing full tone on melody and a tonal solo; a work of beauty. Performances by the Jazz School staff, and especially by John M, are looked forward to with anticipation by the students, and you can see why. This is the pinnacle of jazz in Canberra, and truly international in quality and approach.