More of your editor at Moruya (Moruya 7)

Pics by Sue and Rita 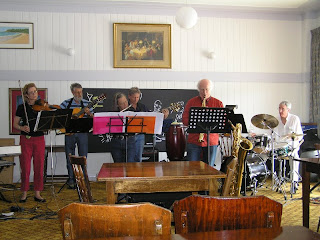 Mother’s Ruin was departure for me. It’s also quite a mix: a ragtime band which also plays several traditional South American charts. It’s led by Oliver Hague and has a following on the local festival scene. Lots of reading arrangements and Scott Joplin, and some pretty odd and challenging time signatures in the Peruvian tunes. Ragtime is part of our jazz history, so it’s interesting in that aspect, and I enjoyed playing the role of a tuba cum sousaphone. This was good fun, and I found real pleasure in the styles. Mother’s Ruin were Oliver Hague (saxes), Margaret Hancocks (flute), Leonie-Ruth Acland (viola), Dave Gibson (guitar), Brenton Holmes (drums), Eric Pozza (bass). 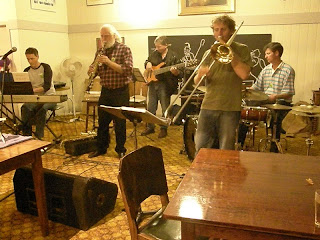 This was unexpected, but Pierre Kammacher was short a bass player, so I got to sit in with Pierre’s Hot 5. Pierre is a past teacher in jazz at Canberra College, and he regularly finds capable players for his outings. The Hot 5 are a mainstream band, playing a range of standards with an early-style (swing era?) approach and sound. There’s clarity in his playing and he’s got great tone on an array of excellent instruments (only Selmer, I think). I always learn something from his accuracy, and I enjoy the exercise in sight reading the charts. Pierre still owes me a beer; I mustn’t forget. On the day, Pierre’s Hot 5 were Pierre Kammacher (saxes), Rod Harding (trombone), Mark Bolsius (piano), Daniel Hunter (guitar, first set), John Marshall (drums), Eric Pozza (bass).

That’s a total of 6 sets, with 5 on Saturday. It cost me most of Catherine Hunter, most of John Mackey, the Big Band and more, but it was fun. When travelling, I’m convinced you can’t see it all; you have to save something to come back to. It’s the same with festivals.
Posted by Eric Pozza at 7:45 pm