Your editor at Moruya (Moruya 6)


Moruya was a big event for your editor. And for CJ’s new writers, who played with the editor as Trio Toucan. I organised two bands for the event, then got asked shortly before to sit in with another, and also got a unexpected invitation on the Saturday for another two sets. So I was busy. I enjoyed the playing, but sadly missed a few events I would have liked to attend.

Pics by Rita and Brenton 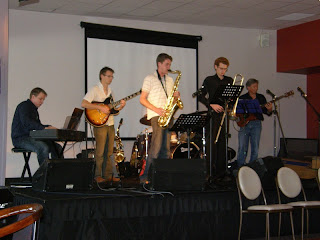 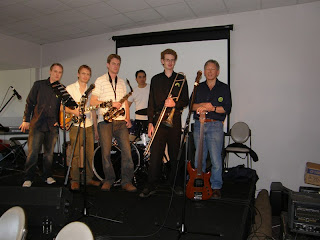 Parlay Parlan was my first outing. It was a tribute to the pianist Horace Parlan. We played Horace Parlan’s most notable post-bop album, Happy frame of mind. It wasn’t a note-for-note replay, but the tunes were in order and there was some some reference to the style of the original. Parlan is most known as a pianist on two Mingus albums, Mingus Ah Um and Root and Blues in the late ‘50s, as well as some later duo recordings with Archie Shepp. He’d suffered polio as a child, so had a clustered right hand style along with a heavy R&B influence. He recorded about 15 albums for Blue Note; this is his best known. We finished with Fables of Faubus, an infectious and renowned Mingus tune from Mingus Ah Um. The gig went off nicely, with some lovely front line work, although my leadership was a bit sus and our communication was not the best. But overall it was fun, and very pleasing when it clicked. And it was nice to play my fretless Maton again after years in a cupboard. Thanks to a band of great players: Michael Cleaver (saxes), Alistair Clarke (trombone), Daniel Hunter (guitar), Liam Wilson (piano) Yen Nguyen (drums), Eric Pozza (bass). 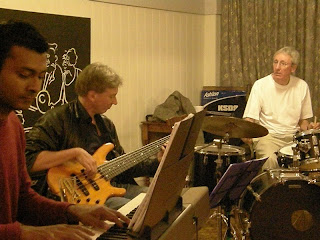 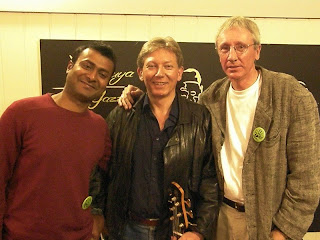 Trio Toucan was my other band. TT is a contemporary cum modern piano trio We played a fake book set. First was Elvin Jones’ Mr Jones, which is a minor blues that I’ve wanted to play for many years. Ballads by Wayne Shorter (Ana Maria) and Miles (Blue and green). Some obvious choices like Footprints and All the things you are. And there was a Coltrane theme in there too, with Invitation and enough cockiness to attempt Giant steps, although at a gentle pace. We had virtually no audience (Recording Ensemble, Mike Hallam, Psycho Zydeco and Spectrum Big Band were playing at the time), but it was a good outing, and we enjoyed it immensely. Lots of space and the opportunity for solos to fill it. Daniel’s classical training and Evans ear make for interesting harmonies. Brenton’s also got classical training from way back, and an energetic push to his playing, and I like the open space for bass to take both a creatively rhythmic and soloistic role. This is the first band I’ve played with where discussion is more on WB Yeats and Rachmaninov than beer and jazz (but not to say we’re wowsers). I’m looking forward to more gigs with this crew. Trio Toucan are Daniel Wild (piano), Brenton Holmes (drums) and Eric Pozza (bass).