Zoe & the Buttercups CD review. I don't usually do reviews, but just for this once. Zoe's Buttercups are playing at Hippo's on 12 Dec. Guaranteed to be a quirky po-mo musical experience. Recommended.

Listen to the last track and you’ll immediately recognise the humanity in this album. It’s alternately sweet and heavy, but it’s a Beatles heaviness. Not metal-heavy: this is joy and humanity talking. And it’s talking with the language of jazz, even if not in its dialect. The language of jazz because there’s the capability and sensibility of the player trained in improvisation and grooves. But the dialect is rockabilly, sometimes rock, sometimes country, only sometimes jazz, and then mainly in the solos. This is a challenge for the ears of the jazz lover, but bliss for the appreciator of the post-modern and indulgence. This is the Buttercups, and Zoe is our host. 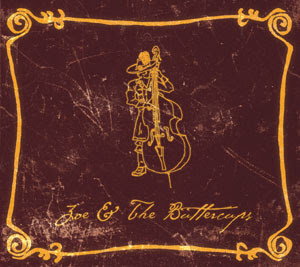 Mum told me of Dad’s advice to Zoe: “If you want to play music professionally, play country”. Well, Zoe has indulged the sense of beauty and intellect which is jazz, but here she has done the turnaround and taken Dad's advice. She’s now released a heavily country-influenced CD with support of various brothers and friends. All trained; all capable; so much more than just country. This is a challenge to all ears. Indulge; you’ll love it. But don’t ask: is it jazz. Whatever, it’s music, and from the heart and the intellect.

But I have one note of concern. The one song on the otherwise instrumental album worries me: The creeps and the weezles. I can’t quite work out the philosophy and I’m not sure if I feel comfortable with it. Does it hint at nihilism and grunge superiority, or perhaps a tilt at an infestation of eco-rats? If it’s a chorus of us-and-them, I feel uncomfortable. We’ve had too much of that in recent years. I remain a little confused. Sad, as it’s so pretty in a ‘30s gothic cabaret style.

But otherwise, this is fun, with solid rockabilly grooves, and style-bending but capable solos on guitar, sax, trom, and occasionally on bass by Zoe. I have various impressions. Pigly wigly hoe down is soooo well named. Sludge bucket is a genuine launch pad for duelling guitars. Boom is a cool '70s funk with trom counterpoint and solos. Miscellaneous madness is edgy (detective Clouseau gets serious) featuring Zoe’s bass soloing against horn lines. There’s a train may have an Ellington reference, but the beat on the 1-3 and the banjo picking make for a very hick swing. The swapped and collective solos make for a satisfying although quirky tune. Buttercupin’ is the name Dad suggested, presumably so long back. It’s a hot, lazy, Sunday-arvo cut-time with sax melody and banjo response (who would have dreamed that up?) then a heavy, slow swing on the bridge. Feral and bed (where does she get these titles?) is Woodstock riffs and degraded, AM audio, then an 11/4 riff with great solos on guitar (obviously brother Ben) and sax. I’m thinking: this album has complex and rich grooves, always interleaved and multilayered. Nice stuff! Belly full o’ whiskey is a very short but lovely duo of sax and trom: cute and rollicking. Then comes The creeps and weezles. I’ve told you of my concerns here: a perfectly good song, but dubious philosophy. Sinchl (what is that title?) is a heavy boogie beat that you could hear at the local blues club when the hottest players get on stage, but with a nice twist in the turnaround and melody. Bill Frisell is a serene acoustic guitar ballad in trio format, with a countrified bridge and an acoustic bass solo by Zoe. Wednesday is a final ballad but with another Beatles-heavy interlude. It’s a humane finish to the album.

So is it jazz? It’s been asked, but is it an issue? How do we define jazz? Improvised music with a beat? Well trained musos who can play rhythm? Either way, Zoe and her Buttercups perfectly satisfy the bill. These are capable and groovy players who convince me, even if the beat is often on the 1-3 instead of the 2-4. I like it!