I love the sound of interweaving harmonies and varying tonalities that you get with large ensembles. So the JazzGroove Orchestra and composer/arranger/pianist Florian Ross were highlights for me. But JazzGroovers also appeared in a number of smaller band performances. 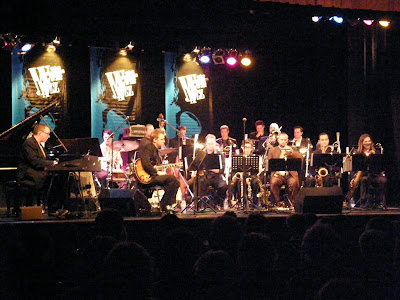 The JazzGroove Mothership Orchestra is a collection of musos from the JazzGroove stable in Sydney. They have realeased two albums: one comprising music of Mike Nock, arranged by members of the band and Mike Nock himself, and another performing the music of the German composer/arranger/pianist, Florian Ross. They have toured these sets in the past, and I’ve heard both of them in Canberra. This time, I got to hear both sets performed at one festival. 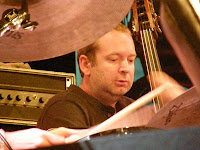 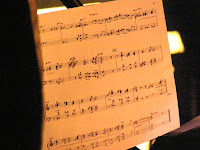 These are very capable, professional, working musos so the solos are authentic and effective, but what most impresses is the beauty of the collective work. The smooth tones of saxes, the blattering honks of troms and trumpets, the cascading patterns and textures, not to forget the driving rhythm section. James Muller is always a stunner when he plays, and it was no different here, but there were great solos all round by the likes of Roger Manins, David Theak (proud leader of the pack), Phil Slater, Matt Keagan and Jeremy Borthwick. The rhythm section was particularly satisfying, both in support or when featuring. Brendon Clarke and Evan Mannell were solid and sustained and driving. Evan’s drums fills were greatly satisfyingly driving despite occasionally having to fiddle with large charts. Guitar and piano comping was all apt and subtle. The band was largely unchanged between tunes and sets except for the pianist (Sean Wayland played the Mike Nock set, and Florian Ross played his set), and the swapping of a sax for a flute for one tune. These guys are always a knockout, and I wasn’t diappointed by either set. The Mothership are: David Theak, Murray Jackson, Matt Keagan, Roger Manins, Nick Bowd (saxes), Darryl Carthew, Phil Slater, Simon Ferenczi, Tim Crow (trumpets), Jeremy Borthwick, Danny Carmichael, John Hibbard, Colin Burrows (trombones), James Muller (guitar), Brendan Clarke (bass), Evan Mannell (drums), Florian Ross or Sean Wayland (piano). 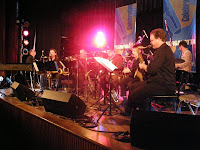 Perhaps my favourite session for the whole festival was Florian Ross’s 8 Ball. This was a smaller ensemble playing arranged music for 5 saxes and rhythm section of 3: eight players. The complexity and interactions of Florian’s music were still there, but the sax section gave a different, smoother and more languid sound. The performers were taken from the JazzGroove Orchestra, with Florian Ross himself on piano. Lovely. David Theak, Roger Manins, Richard Maegreith, Nick Bowd (saxes), Brendan Clarke (bass), Evan Mannell (drums), Florian Ross (piano). 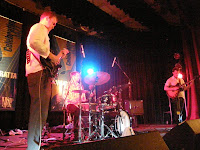 Alcohotlicks were an odd combination (drums and two guitars) playing a pretty odd set for a jazz festival (somewhere amongst rockabilly, blues and fusion). Strange lineup too (no bassist): Zoe Hauptman lost the gig when she went off to China for a few months, and they (respectfully I’m sure, as only a brother can do) discovered they didn’t need her. But this was a little bunfight of a gig. Loud, fun, different, and much enjoyed. Alcohotlicks are James Hauptman (guitar), Aaron Flower (guitar) and Evan Mannell (drums). There was at least one other alt-jazz outfit (one with a turntablist) but I sadly missed it. 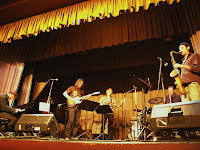 Slightly less challenging for the audience, but plenty challenging for the bassist, was 20th Century Dog. This is Cameron Undy’s compositional vehicle, but his place was taken on the day by Zoe Hauptman, as Cameron’s wife was giving birth any day. (Best of luck from CJ). Anyway, Zoe had one rehearsal, and they carried it off. These players are perfectly capable, so it’s not unexpected. Zoe seemed a little reticent but also enjoying the ride. I like these players. These were solid grooves and sharp soloing in a more rocky vein. On the day, 20th CD were Matt Keegan (tenor), Carl Dewhurst (guitar), Gerard Masters (piano), Simon Barker (drums) and Zoe Hauptman (electric bass). Just to highlight the Canberra connection, Zoe, Cameron and Carl are all Canberra born, bred and trained, although now resident in Sydney.

Hi enjoyed reading the review, as I couldn't make it this year. Great pics.

Eric are you on my network for the Sound Travellers project? It is a national touring initiative with a grants process for musos. Do you have a network you would like to spread the word through? check it out on www.soundtravellers.com.au. Grant guidelines should be up in a day or so.