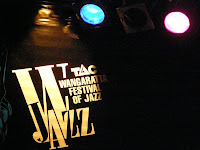 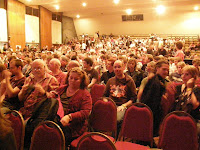 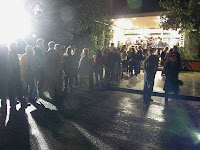 Obviously CJ’s reports have featured the performers: it is a jazz festival, after all. Wangaratta is a festival for the top players, so it’s a passive event for many musos who would play at lesser events, and also for those who just love the art and attend to listen. The Festival Office told me there were 25,000 attendees at this festival. I wouldn’t have guessed that number, although Saturday was a busy day in town. Good to see so many people attending jazz, but it did have its down side. The obvious corollary were the queues. They were long for many of the key performances, and sometimes late comers didn’t get in.

The prereserved seats were one answer. The festival pass cost $135, and you could prebook seats for certain high profile concerts for an additional $10 each. I found it was definitely worth it for Dave Holland, but not necessary for anything else. But it does avoid the queues and gives you prime, front- or second-row seats, where you can hear the stage sound, and take pics up close. But then, most of the reserved seats remained unfilled even after the gig started. 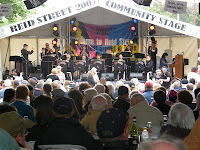 The public event was in Ross Street which was closed off for a session of food and wine and free entertainment, and there were loads in attendance there. Good food & grog too, this being a famed region for wineries. The ANU Recording Ensemble played in this space, as did various school bands and other performers. I just caught one band playing popular big band jazz, but very capably. 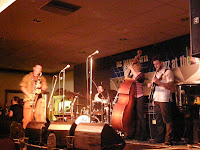 The late nighters congregated at the Hotel Pinsent for the jam sessions. I attended one night, but found it pretty predictable (all the standard blues and bop tunes) and too loud. But it was lively, and the beer went down easily at the end of the day. I heard plenty of people complaining of lack of sleep.

ABC broadcasted several sessions from the Town Hall, so we got to put faces to several presenters we hear regularly on FM or RN. The print journos were there too. I met Peter Nelson (Advertiser, Australian), Roger Mitchell (Herald Sun), Jessica Nicholas (Age) and John Shand (Sydney Morning Herald). Amusingly, they were to review the festival in 450, 600 or 1,200 words. 450? Impossible, but that’s the editor’s limit. At least it’s good to see the Festival getting written up.

As for the social side, I found it very friendly. Most people on the streets were there for jazz, and they were open and friendly, and you always had a topic for conversation: the latest gig or whatever. There was a considerable Canberra contingent, too. Given CJ’s Canberra-centricity, one thing I liked was the opportunity to hear Melbourne musos. We tend to get the Sydney contingent visiting Canberra, but Melbourne also has an active jazz scene to catch up on.

The venues were huddled together within a few paces, which was good given the rain. But there will be a major change next year. The Town Hall is due to be demolished, and a new cultural centre should be under construction. Perhaps the sound will be better, but I dread the formality of a concert-hall-like venue. And just what will be the main venue for the 2008 festival, while construction is underway, is not advised. Perhaps a marquee.

Accomodation is the other factor. The hotels and motels are booked out well ahead, and many stay in local towns and drive in. There’s also a home-stay on offer through the Festival Office. I took that, and got breakfast and a cumfy caravan within walking distance of the venues, at a cost well below that of a motel room. Also, it gives you an entrée to the locals, so it’s a sociable option, especially if the family doesn’t quite share your passions and decided to stay at home!
Posted by Eric Pozza at 5:12 pm