Open at ArtSound (AS1)

ArtSound ran its annual radiothon over the weekend. This year, the radiothon was dubbed “88 keys to happiness”. 88 keys; sounds familiar. ArtSound was collecting to fund its recent purchase of a new Yamaha grand piano (C6?) for its recording studio. I hear the sound of the Yamaha grand through $15,000 of Neumann mics is superb, so the studio just gets more attractive. Keep it in mind if you are seeking a moderately priced, professional studio with top mics and 48 channel digital tracking, pleasant surroundings and capable engineering. On the day, it was nice to see a solid level of support for the radiothon during the morning. And you can put your name to a piano key if you wish to be remembered. 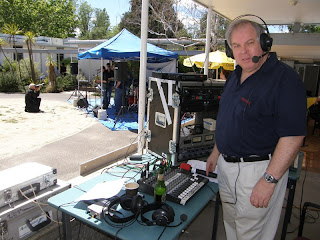 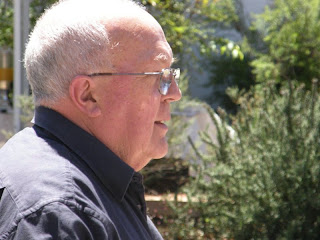 The radiothon featured an open day at ArtSound’s studios at the Manuka Arts Centre studios on Saturday. There was coffee, grog, snags, politician visits (it being an election campaign), and 5 bands playing live to air from the courtyard amongst switches back to the studio. As always, this was an interesting and very professional day run by the mostly volunteer staff of the station. We are lucky to have such a resource, especially as it’s so knowledgeable and supportive of the jazz scene in Canberra.

I caught three bands of the five: James LeFevre Quintet and Quantum Theory, both from the Jazz School, and Kooky Fandango, made up of amateur players around town. 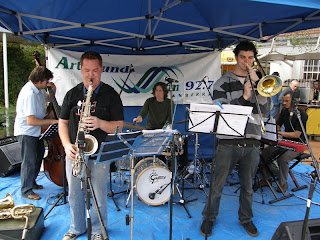 James LeFevre played a similar set to that at Moruya. Well played, bluesy, entertaining, with a fine collection of players. They play a wonderful arrangement of a piece from Gary Bartz, Eastern Blues. This locates the music: rootsy 70s jazz-funk. Great stuff. It’s a style I love, and one that I reckon is eminently sellable. And the players do it so well. They set up and sustain grooves, but more involving is the way the develop intensity, from quiet and searching to raging solos, then sudden decays to almost subliminal. There’s a drum solo in Eastern Blues which says it all: instruments playing a unison line (common enough) supporting the solo, but arranged so the unison line changes time signatures and intensifies over the solo. The front line of tenor (sometimes baritone) and trom is a nice one, and the rhythm unit of acoustic/electric bass (Kane has a job with frequent changes), Evan’s excellent drums and Ben’s wonderful keyboard fills and choppy funky styles works a treat. A very entertaining and capable band with original arrangements and charts. James LeFevre (tenor, baritone sax) plays with Rob Lee (trombone), Kane Watters (electric, acoustic basses), Ben Foster (keyboard) and Evan Dorrian (drums).

Eric
Thanks for the great coverage and thanks to all the bands that donated their music and time to the ArtSound Open Day. Note that the ArtSound Radiothon "88 Keys To Happiness" goes all week and ends on Sunday at 6PM. We're raising funds to purchase the Yamaha C6 grand piano that's already in our recording studio - to support quality recording of local musicians (especially jazz!) - and invite your membership, donation or "purchase" of a piano key by calling 62957444 before 6PM Sunday 18 November. If anybody would like to have a free live on air radio gig between now and then, please contact me at the above number.