The guitars have it (Wang 2)


Guitars were a big theme at this year’s Wangaratta Jazz Festival. Firstly, and most obviously, because it was this year’s instrument for the National Jazz Awards. Secondly, because of the visit of the renowned New York guitarist, Kurt Rosenwinkel. Thirdly, due to the presence of those Australian masters of the instrument, James Muller and Stephen Magnusson.

The Awards were a fascinatingly attractive thing for me. I attended late on the first day of the semi-finals to hear the two Canberra entries: Ben Hauptman and Carl Morgan. But the sessions were strangely addictive, so I was back next morning to catch the five remaining players. The ten semi-finalists were chosen blind from CDs sent by applicants, so these were all worthy entrants. Each player performs three tunes (a blues, a ballad, a composition by Bird or Scofield) with common accompaniment. Three entrants are chosen to perform on Sunday for the final. Strangely, the finalists performed the same three tunes for both performances. Not strangely, given it was the final, in the main hall, and going live to ABC Radio, they each looked pretty nervous, and clearly all made some minor fluffs. But it was capable playing all round and a fascinating few days. 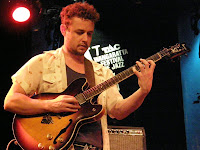 What got me most was the diversity of the entrants. There was straight-ahead jazz, fast and slow, post-modern, blues and rock influences, clean and effected. It was all there. I didn’t envy the judges, although the criteria would have helped markedly. I didn’t always share the decisions of the judges, but that’s part of the game, and a common topic for conversation on the streets.

The winner was Aaron Flower who performed two simple, blues/rockabilly tunes with notable accuracy and a superbly lyrical version of the lovely ballad, You don’t know what love is. My guess is the ballad won it for him: it was truly sumptuous. Second place went to Ben Hauptman. Ben’s Canberra born and bred and a product of the jazz school and now resident in Sydney, along with his talented siblings, Zoe (bass) and James (drums). He played a more rock-influenced set. I loved his starter on Ellington’s Caravan. Then an original ballad in a trad vein, Unity Hall, and a highly effected Billie’s Bounce. I had missed Hugh Stuckey of Adelaide at the semis, but he was the talk of the streets before the final. He played a straight-ahead clean jazz style with panache, so he was also a good chance. 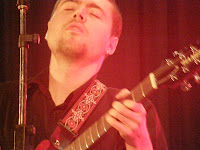 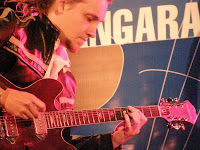 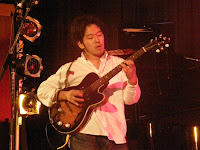 I also heard several other semi-finalists of note. Carl Morgan is our local flash at the jazz school (viz, his nickname is Nuke as in nuclear bomb). Carl played a Scofield tune, It is written, along with My foolish heart and an original blues tune in the fast, flashy style that we know him for. Carl was the youngest of the semi-finalists (only 19 and only in his second year of tertiary jazz studies). The relative lack of experience showed, but he’s likely to be around for the next guitar awards and should be a force to be reckoned with. I also enjoyed Nashua Lee’s highly effected and blues-rock influenced set, Matt Smith’s sweet and stylish modern jazz playing and his choice of tunes (including a lovely Charlie Haden ballad, Spanish love song), and the confident, otherworldly sound and approach of the Japanese born, Brisbane-based Yusuke Akai. I didn’t hear all performers, but I sympathise with the judges.

For me, perhaps the stars of the whole show were the rhythm section accompanists: Sam Anning (bass) and Ben Vanderwal (drums). I’ve written of each of them several times on CJ, and they are both excellent. Here, they accompanied in numerous, radically different styles both appropriately and supportively and soloed freely and on command. Admittedly they had the advantage of being continually warmed up, and not having the spotlight on them, but nonetheless they were superb. Theirs were stunning performances in their own rights. 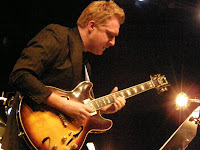 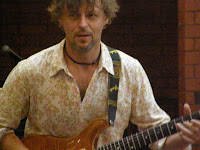 The panel comprised the venerable Mike Nock and the two guitarists who shared the Award in 2000: James Muller and Stephen Magnusson. These are a very different pair. I have heard James numerous times, and several times at this festival. He’s cool, sharp, professional and controlled in his playing, but his lines are fast and clear and rise with massive passion and often huge denouement. James may be a local, but he’s clearly a world-class exponent of the instrument. I’ve only heard Stephen at this festival, and don’t really know him, but what I heard seemed more fluid, soft and sweet. Definitely his presence is very different. Usually we think of Sydney as brash and Melbourne as cultured. This pair presents a challenge to those stereotypes.

The other guitar highlight was the highly regarded New York exponent of the axe, Kurt Rosenwinkel. He’s renowned as perhaps one of the greats of the present time. My guitarist friends seem lost in description and comparison, so he’s got a unique approach. I didn’t attend his solo concert, which got some very positive comments, but I heard him in two performances with Barney McAll’s band. The PA sound was abysmal for the first and only reasonable for the second, although I felt his first performance was the more interesting. It was obviously competent, interesting and sometimes searing, but I need more time and better sound to form my personal opinion (with a world great, my expectations are more demanding). But it seems I missed something, given this reference from Scofield: “one of the finest and most creative jazz guitarists playing today”. I’ll just blame the lousy PA mix!