I was wondering just what to expect from Mike Nock’s CET (Creative Electronic Trio). They played last night for the first Gods session for 2010 last night. I thought maybe e-bass and several keyboards, but it was a more limited excursion into electronics than that. Mike was playing a Nord, with its identifiable piano sounds and retro synthesisers, and I guess that’s what gave the label Electronic, and there was one funky tune that benefited well from synth bends and the like. But otherwise, it was frequent brushes on the drums and even gut strings on the double bass, so that instrumentation was quite conventional, even traditional. I’ve seen several more electronica-style bands recently, but so what? Mike played a style I love and I enjoyed it immensely. I heard it as a modern, challenging ‘60s performance, playing mostly standards-type tunes (and one funky jazz-rock number), but with verve and excitement and high skills and always challenging and on edge, with some dabbling in electronic timbres and washes. The grunts and facial contortions and singing with solo lines and the sheer exuberance confirmed to me that this was not an easy, relaxed outing, but one that the band played with awful seriousness. As serious as your life, to borrow a famous jazz expression. 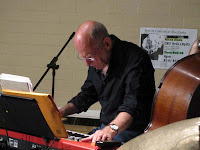 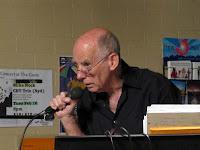 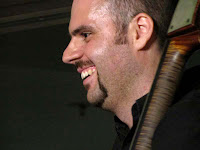 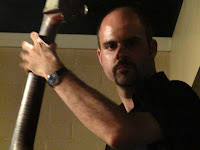 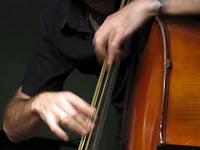 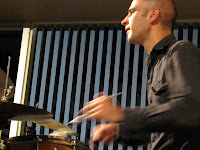 Mike led the band, although with clear respect for his fellow performers. He’s known as generous and supportive and as a mentor for many young musicians in Australia. This trio has been playing together for many years. The ease with which they threw around the decision of what tune to play showed that. They obviously had no formal set list. Their familiarity and informality was evident in Mike’s chats, where he asked the audience about the sound or briefly mentioned his history with a tune. As for playing, you could hear the long experience and skills as he took on a tune, worked over the chords, took ideas and retained them as long sequences through dissonance and back to consonance. Long solos of skill and edgy challenge and essentially pianistic techniques. But with an obvious melodic sense and references to the mainstream history of jazz.

I felt that Ben responded similarly, with a good solid tone and a strongly melodic conception. After the gig, he told me about a buzz in his bass (it’s an old German bass that suffers from the dry air of Canberra) and explained the gut strings don’t speak as quickly as steel strings. But I still heard long, hammering solos well into the thumb positions, and rapid movements through the fingerboard. And a melodic approach that was embroidered with challenging rhythmic patterns. There was also one fully French-bowed solo with reliable intonation (bowing is far less forgiving of intonation than pizzicato). It was a big role on the night, with frequent and long solos, and a deadly serious look on his face while playing versus an open smile between tunes. Brother James seemed more modest in performance. Openly looking on to Mike and Ben, drums faced in to his colleagues, sideways to the audience. He took a few solos: I especially noticed his last, long solo that was a more funky or rocky style. But mostly I heard softly responsive brushes and sparse, open playing that spoke with the melody. It was open and respectful playing that nonetheless seemed to lead each solo to build in intensity. More evidence of that era of jazz: the solo as the core exploration and purpose.

They started with an easy blues, House of blue lights by GiGi Gryce, all comfy swing and melodies that oozed over the bar lines. Then Ellington and a melody played unison by piano and bass, and particularly impressively on the bass. Then Cry me a river as a slow waltz and a “burner” in bop style that had some luscious contrary motion and counterpoint on piano that said classical to my ears. Also Armstrong/Fitzgerald tune (I would be friends?), another waltz, a funky original, and a few others.

It was a wonderfully intense study of modern mainstream jazz as I heard it, and I enjoyed it immensely: on edge, and challenging for both audience and performers. Hot. Mike Nock’s CET (Creative Electronic Trio) featured Mike Nock (piano) with brothers Ben Waples (bass) and James Waples (drums).
Posted by Eric Pozza at 8:14 pm