This was certainly unconventional! That was the first thought I had on attending SoundOut 2010. SO was billed as a one-day festival of free improvisation and new music to be held at the Street Theatre. It particularly interested me with its cast of international performers and sponsorship from two governments/embassies (Norway and Argentina). I attended the evening session. The musicians were presumably gathered with intent and planning, because there was a spread of instruments and styles, and they complemented each other well. The final all-in blow (if that’s a word used in this community) was well balanced with a range of instruments and no doubling up. They were (mostly) pretty staid musical instruments that they performed on: trumpet, double bass, keyboards and piano, guitar. That was a matter I pondered on during the performance: if the sounds and techniques being used are so far from conventional, why are they even bothering with standard instruments? But they were, with frequent bows, mallet blows and the rest. I felt for the poor double bass that got a good whipping and I wondered if the bows used as drumsticks would stand up to the beating, but that was the extreme end of the performance spectrum. All up, it was in good cause and the result was fascinating and certainly worth the visit. 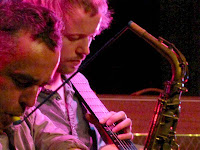 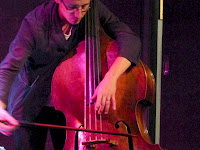 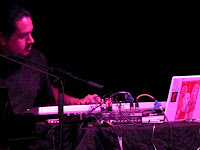 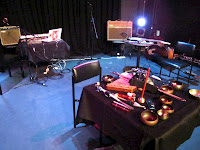 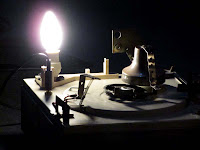 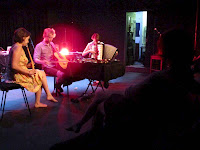 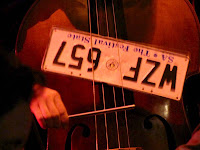 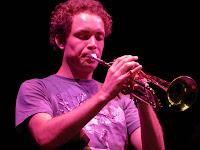 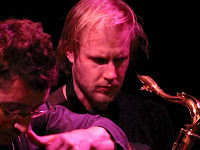 This is a music that demands absorption and release to take in. I think of the Necks, which is not a band I regularly listen to, but one that gradually entranced me in performance. This was different in many ways from the Necks, but both musics are solitary and inward, demanding closed eyes and cleared head. There were drones and slow movements and sounds, but there was also a lot of percussion and suddenness and unexpectedness. No doubt, the unexpectedness was shared by the musicians. I guess many of the improvisations were unstructured and pretty much unprepared (aka jams). These seemed to start laid back, and moved up and down in volume and intensity over time through various merging sounds, and eventually falling to a similarly laid back end. For these improvs, I had the feeling of the world ending, as in “not with a bang, but a whimper”. They were spacey and science-fictional, and at one time I was thinking nebulae and neutron star binaries and expected astronomical images to be projected behind the performers. I was taken in by the slow, interiorised movements, but I did find this approach a bit indulgent. But there was also (some) order, and suddenness and percussion, that were of a different order, and I found it more insistent and arresting. I preferred this approach, but maybe it’s a matter of personality.

The first performance was by Kim Myhr, Jim Denley, Eivind Nordset Lønning and Clayton Thomas. This was ethereal sounds: brushes on guitar body, bow on bells, mallets and string slaps on bass. Constant, unearthly, sci-fi music; eerie and intense and little defined. The second was real time processing piano and electronics by Gerardo Morel. An incessant 6/4 pattern defined the base, with an overlay of truncated notes at ill-defined times and crackling tones (I thought of hi-fi noise that you’d hate to hear, but all sound is valid in this context) and perhaps ADSR synth tones and percussion sounds and piano free of a tonal-centre and ending in a pale, repeating, effected word: “Never”. The third performance was by Zypce on percussion with pianist Adriana de los Santos. They played several overtly political works with titles like “Even distribution of wealth”, “Social control” and “No taxes, no …”. These were obviously scripted with charts and accompanying sounds (voices or orchestration or drum machines) and unconventional instruments (metronome, amplified turntable, prepared piano, strung wire) and even some conventional piano playing which was quite unexpected. I loved the stunning cross rhythms and complex, scripted interactions and I was relieved to hear the conventional piano. This was my favourite performance: more structured and composed, pertinent and political, entertainingly dynamic and I guess just closer to home. The last group performed another distant and quiet and secluded piece, interestingly with piano accordion and an odd wavelike wind instrument and guitar and those unearthly bowed bells. Then one by one, the other players stepped up to finish the night with an all-in blow. Everyone together with more mallets and bows and altered instruments (eg, flute body with sax mouthpiece, or sax with stretchy, rubber mouthpiece thingie or number-plate bass) and standard instruments played unconventionally (eg, breathing through a trumpet or almost anything on the double bass). I sat there with pleasure but also some bewilderment and even mirth, convinced that there was humour amongst the seriousness. Overall, I feel the whole was attractive and involving, and at its best was deeply satisfying.

An encounter at the end of the concert was appropriate. I saw someone writing up notes, so assumed she was a reviewer, perhaps from the local paper. No, she replied, so I asked if she was going to use her notes. Yes, she replied, she was a philosopher of science. Mmmm. I don’t see a strong connection, but perhaps it’s there. This music was like that: like everything and nothing all at once. Now there’s a philosophical question to ponder.