I don’t hear Tina Harrod as a jazz singer. Nina Simone is a major influence, and listening to her first CD, Worksongs, I can hear touches of Billy Holliday and Renée Geyer. I guess it’s called soul, but these labels mutate. It’s clearly rooted in a black American past, and its training is more in southern Baptist churches or blues clubs than in tertiary jazz courses. It’s not the high intellectual art of jazz, informed with complex scalar and harmonic knowledge, but the raw emotions of passion and personal truth. That’s not to say there isn’t wisdom in it. She chooses great songs by a range of singers and reinterprets them in her own way, and when she writes, which she does a little for Worksongs and comprehensively for her second CD, Imaginary people, the stories speak sparsely but tellingly of love and need and pain and the images are vivid. They cut to the heart, as they should. It might not work so well on a blog, but lines like these are incisive on stage and in context when poured out with Tina’s plaintive voice: “And I was beautiful underneath your spell”, “You’re so unsafe, just like my high healed shoes”, “What becomes of people / What becomes of people who meet and fall in love”. She has an ardent but doleful voice that makes you melt. There’s no pretence, just the words and their stories and their melodies, often flattened slightly in bluesy presentation, and perhaps with a falling figure at the end of a line. I loved it and was touched by it. 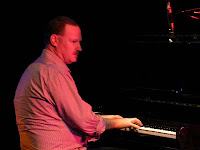 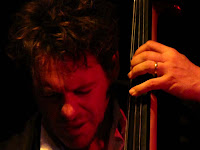 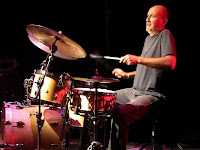 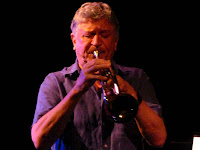 The band was just exquisite, too, as a sparse and distilled accompaniment. Matt McMahon seems to excel in this role. His piano is judicious and unassertive. He introduces lovely harmonic movement under the singing then solos in consonant styles that clearly follow the tunes. That’s appropriate, but I like a bit of dissonance, so I enjoyed his solo on Stevie Wonder’s Big brother, where he lets go some rapid runs through descending keys, and was floored by a solo late in the second set where piano descended into cacophony while drums exploded against a bass pedal. I thought it would end the set, but they pulled it back and returned to song. That was a stunner. Jonathan Zwartz was concentrated and contained, but there were spots of release where a quick line slipped in, or a rhythmic jog. He’s a big man, with hands to match. Big hands lend a comfort with the double bass that smaller hands can’t. I could feel his ease of playing, the way he could drop notes or lightly tease the strings with barely a touch: harmonics, sweet spots, the lightest of tones on call. He played a few solos but a particularly lovely one on the blues later in the night was very well received. I don’t know why, but bass solos tend to be well received. This one richly deserved it. I also enjoyed Hamish Stewart. His performance was the heart of discretion, underplayed and precise, so his release with an explosive fill, or his solos accompanied by a big smile and flailing sticks, or that cacophony I mentioned above seemed out of character and appealing. The band was like that. Restrained has to be the word, but there was tension and precision and an ability to fill spaces so aptly and subtly that was wonderful. The tonal palette expanded when Miro unexpectedly sat in on trumpet for two tunes. As I remember, the first was Comes love, but I particularly enjoyed the blues solo with mute which was soft and fluent and fitted the mood so well.

The repertoire was taken mostly from Tina’s two CDs. The originals were penned by Tina with a fellow composer, usually a bassist: Jackie Orszaczky and Jonathan Zwartz. Jackie Orszaczky is sadly missed, especially by Tina, but it’s interesting to see that Tina has developed an approach to writing with bass players. I noticed a comfort with funky, rocky rhythms and changing time signatures, and my guess is that it’s a product of writing with bassists. Other tunes were by Stevie Wonder and Bob Dylan and Nick Drake and others.

It was a disappointingly small crowd for Tina but the positive side was a supremely intimate performance for us. I loved it and was touched by it. She’s a wonderfully affecting singer and the band fitted like leggings. A memorable outing: very close to the CDs but so much more involving as a live performance.