Collective is a descriptor that’s been used by a number of bands since the 60s. They are usually at the avant-garde and/or communal end of the spectrum, what we’d call the left in politics, and imply a more cooperative approach to composition and creation of the music that renunciates the “big man” concept of a leader. A few mates and I have borrowed the term for our informal musical gatherings. It’s useful when you don’t know who might be available on any one day. We get different combinations of instruments and it’s so much easier to organise amongst otherwise busy lives. Maybe one day we’ll venture into composition and new musics, but for now it’s just a means to more easily arrange sessions. We meet at Quiros Street, so we are the Quiros Street Collective or QSC. 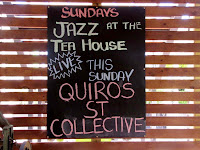 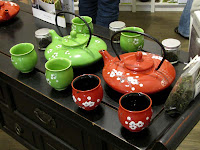 QSC did a gig yesterday as a piano trio playing standards, and with a singer/guitarist sitting in for a few tunes. Hardly avant-garde, but enjoyable nonetheless. It was a beautiful day, warm with a gentle breeze, and we were outside but under cover. The gig was for Adore Tea, a venue which is currently supporting local jazz with Sunday afternoon concerts. The trio sets were more indulgent, as instrumentals are, with longer solos and a more challenging take on the tunes. The vocals sets took the pace down a little but got more audience response, as vocals are wont to do. I found it interesting to hear words to jazz tunes, like Miles’ Four, and even some standards and latins that I know as instrumentals. We played a range of ballads and swing and latins: nothing unusual but beautifully written tunes that are tuneful and classic and always interesting to play. Thanks to Peter, Brenton and John for the outing.

Just an aside about voice. I was reading Bass Player mag the other day on Slam Stewart and Major Holley. They are early bass players who sang while playing bass. The article accompanied a transcription of Close your eyes, a number they recorded together, singing scat with two basses, accompanied by drums and piano. There was a comment from bassist Lynn Seaton saying that “singing while playing has helped me hear … instead of just letting my fingers play digital patterns” and perhaps more interestingly “having to take a breath forces me to leave space and improve the phrasing. It also helps my ability to play in tune” (Bass player, v.21, no.3, March 2010, p.51). Vocals really do introduce a humanity that instruments can lack. I tried to sing and solo and there was something different. Just to show how valuable is a voice.