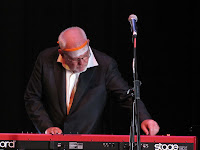 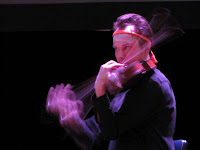 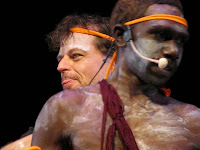 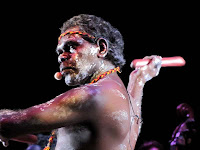 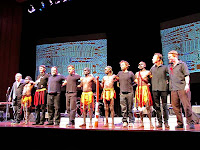 It was quite minimal, quite droney, quite miasmic, quite intuitive and internal. Crossing Roper Bar was a combination of Paul Grabowski’s Australian Art Orchestra and four aboriginal performers, the Young Wagilak Group. The work was Crossing Roper Bar. It was sponsored by the HC Coombs Creative Arts Fellowship. It lasted 40-minutes and comprised a series tunes/grooves, largely without a break. I earlier noticed strains that I recognised (was it Hancock or jazz-rock Miles?), then there were clear grooves that were predetermined, and signals leading change, as well as constant taps of clapsticks in various simple, cutting rhythms, and less common didjeridu accompaniment. The rhythms were king, so bass and drums were key. These were Philip Rex and Nico Schauble, so very capably presented. There were colours and textures and occasional solos from reeds and trombone and violin, tinkling piano and keyboards making appearances but not prominent, and guitar also tinkling or texturing. Then the front line. This was obviously very different: those incessant claps, droning vocals that touched on Western scales but moved and bent into a very different sense of tonality, sometimes vocals in some sort of harmony that sounded satisfying but not understood by my ears, the didj, of course, but also that sharp, animal- or bird-dancing, the heels and toes that rock and tap and slap so precisely, the body and arms that snap from position to precise, repeated position. It’s something white Australians know of and even feel to some degree, but not something we make. The joyous but incongruous juxtaposition of bodies and cultures at the curtain call made this painfully obvious. But the good will was also obvious and welcomed. This is a cross cultural event, even if it’s a product of one country. We need it, although I for one don’t particularly understand it.