There were 22 bands appearing this year at Jazz Uncovered over 3 stages, and an additional two school bands that performed on the Blackboard stage. There were 8 visitors from the Sydney scene, and additionally at least one recent ex-student who’s now in Sydney. What was most impressive this year was the variety of styles: capable playing in all manner of styles. The variety hints at a vibrant and exploratory scene here, mainly centred on the ANU Jazz school but also in the broader jazz community. So how did I find it? Here are just some minor, immediate and little-considered jottings. 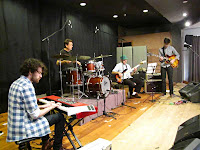 The two first sets on the Main stage were broadcast live to ArtSound. Andy Campbell’s band, Jubb, was first on, playing Andy’s originals: loping, thoughtful, relaxed music with titles that speak of Andy’s life in Canberra.

Then Rachael Thoms and Luke Sweeting for a deliciously different set. Rachael is trained as a classical singer (lyric soprano) so brings a vision to songs that sits beautifully with Luke’s tasteful playing. This was a lovely and effecting set. 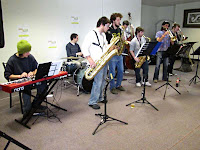 Meanwhile, Jono Lake’s Lakeside Circus was performing next door. This is richly orchestrated circus music, simple grooves, testing hits and melodies, dissonant front line harmonies. It’s a challenging melange of sound built on the most playful of entertaining grooves. I love this stuff; totally infectious and intellectually satisfying. A bit rough around the edges, but I can’t imagine it any other way. By this time Matt Lustri’s In all languages has started up downstairs. There was a little mutual interference between a social lunch of a large gathering of Vicentini and this band playing very challenging, very unlunchlike music. Unlunchlike? One tune was a dedication to Charles Ives. Got the picture? But it all worked out in the end, with some very unexpected Italian stage patter from Alex Raupach and a gift of crostoli (a Venetian biscuit delicacy) from some very decent Vicentini at the end of the set. 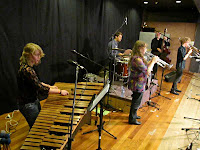 More or Leske performed on the Main stage. Claire Leske leads a group composed of siblings and others playing originals and others in the cool to hard-bop tradition. Interesting here was the appearance of marimba, a big, timber mallet-percussion instrument with a thuddy wooden tone. 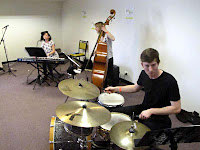 Then Olivia Henderson with her Olivia Trio. This was a particular favourite with the punters and with me. Olivia was supported by Hannah James and Evan Dorrian. I hadn’t known that Evan was back from London so this was a surprise. Ed Rodrigues was to play this set, but had to pull out following recent bike-riding injury. Not surprising were the solid interpretations, good feels, and selection of interesting original tunes and non-originals from Wayne Shorter and the like. A wonderfully expressed set with free flowing harmonies and well felt solos. 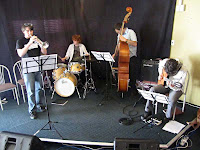 In the meantime, Reuben Lewis was playing downstairs with his Quintet cut back to a quartet. I just caught Reuben, but I like his compositions and his band and I noticed his soloing on the day was better than ever, fluent and lyrical and clearly formed. 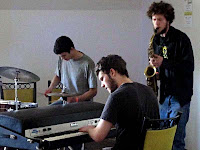 bellicose was a touch of free. I was unsure if there was any structure. This was the glory of tone: the bell-like authentic Rhodes piano of leader Austin Bucket, with simple ringing percussive bells and airy and unforced sax. The euphony was lovely. The demands of such immediate and unregulated sound were not for the fainthearted but with closed eyes it takes on a perfection and inevitability that takes you beyond time.
Posted by Eric Pozza at 8:23 pm