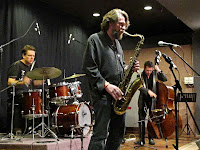 On the other hand, John Mackey’s anything but smooth. John’s a virtuoso player with heart on his sleeve exuding passion. This time he was teamed with Mark Sutton (on the Sutton stage; named for the same reason as the Lowe/Milman stage) and the stunning bassist Jonathon Zwartz. John M was clearly not even sure what they would play: they ended up to be standards but these are performances of individual brilliance and group cohesion. Have you met Miss Jones, a blues, In a sentimental mood and one other: all fabulous and energetic and harmonically rich. John would take lines that just soared through and around the harmonies. Jonathon would hold the harmonies then solo fast and furious, or steady and lyrical, throwing in extended bass chords on the way. A lesson in jazz double bass. Mark’s no slouch either. 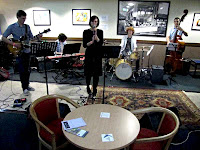 I just caught the last few bars of Matilda Abraham’s Quintet, but wish I’d been able to hear more. Carl Morgan was in full flight with a fast and expressive but guitar-clean solo, and Matilda finished up with cool and calm voice. What I heard sounded good, well attended, and on the best stage in the place, the relaxed and very jazz-apt bar. But it’s a long day, and I was flagging a bit. 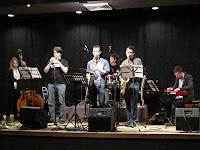 Next was Luke Sweeting with a sextet on the Main stage. This was three horns up front (trumpet, alto and tenor) playing Luke’s compositions. Good and interesting and room for solos. I especially noted alto sax player Matt Handel. It’s a name I’d heard but I didn’t know him. His solos were a dream: well formed, nicely punctuated between outpourings and lyrical introversion. I caught a pic of his two offsiders in the front line watching his solo: evidence of respect. I must catch more of Matt. But the band overall was swinging nicely with Hannah James and Evan Dorrian in the rhythm section and some very capable front line melodies. 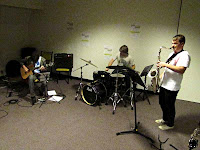 Tangent was a return to experimental. James LeFevre led on tenor and curved soprano sax, with drums and guitar, playing Ornette Coleman and the like. There was no bass, but Matt Lustri played quite a bit of single note bass-like lines on guitar. Again not the easy listen but demanding of a readiness to close eyes and open ears. 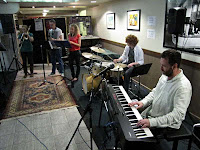 Matt Thompson returned with another bass-less outfit, but again there was a bass line from his organ playing. The lack of an acoustic or electric bass player is not unusual in organ outfits, of course. This displayed Matt’s typical uber-cool, distilled approach. Banish the unnecessary, maximise the value of every note. He was accompanied by drums and a front line of trombone, tenor and alto saxes. Ever cool and understated. 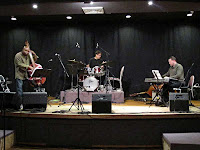 Fingerprints was Eric Ajaye’s trio for the day, featuring Matt McMahon and Mark Sutton. Along with Jonathon Zwartz, this was an education in bass. At this level, it’s not a matter of good or bad, but of style and approach. Eric’s approach was clear and softly spoken, with liberal vibrato or slide. Jonathon’s was soft in tonality, but explosive and expansive over the fingerboard and with some quite unique chordal playing. Fingerprints was a space for expansive solos, but perhaps more in a self-contained way than John’s trio, and also on tunes that were of more modern harmony. I particularly liked their rendition of Crystal silence, with Eric’s crystalline, diatonic solo and Matt’s expansive playing that touched on and toyed with dissonance. 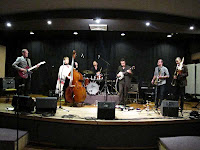 So that was my JU2010. That is, apart from the preparation and committee meetings and the eventual clearing up and thoughts of a possible followup in 2011. What a day! What an intellectual and emotional treat! But how sad that more punters didn’t share it with us.
Posted by Eric Pozza at 8:07 pm