The Captains came for Floriade, ie, Katie Noonan and the Captains. Not all the Captains, because Katie usually uses a bassist and ex-Canberran Stu Hunter on keyboards. Today, it was just two guitars and drums with Katie on keys, glockenspiel and vocals. But the Canberra connection was maintained given one of those guitarists was Ben Hauptmann (who’s also returning for Jazz Uncovered next week). In addition, Katie included a string quartet which I think was local (I’m sure I’ve seen one of the violinists in the Canberra Symphony Orchestra). So the ship was changed, but the destination was the same, and the voyage was interesting and worthwhile. 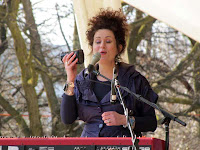 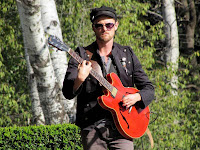 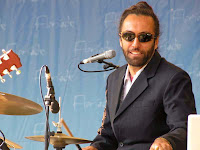 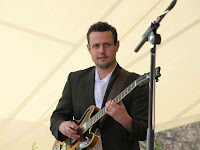 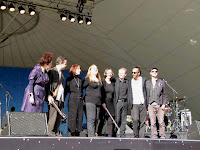 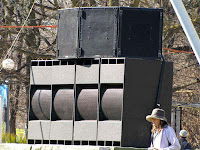 We can expect interest from Katie Noonan. She sings songs with a complex and mobile voice. The songs are written by her, the band, also in conjunction with the best Australian songwriters (Don Walker, Paul Kelly, Neil Finn). And the songs are wholesome if exposed with songs of family and husband (challenging jazz tenor saxist Zac Hurren). The arrangements are anything but jazz or rock or most pop, even. Then reminded me at times of Beatles, with sheets of music, rock drums with guitars providing harmonies and colours, overdriven and sustained, texture rather than solos, laid back tempos. It’s not a music of individuals, other than the singer, but of an ensemble. The string quartet easily fitted the approach. There were dynamics and crescendos and sustained loud passages that were emotionally intense, almost anthemic. I loved the pretty glockenspiel that Katie often played in place of keys. I’d gone looking forward to hearing a big PA in an open space. I find it a pleasure these days, when sound is good. This wasn’t. It was a dirtier, boofy PA, more suited to rougher rock than something with this detail, harsh, edgy and indistinguishing. Heavy on bass, so the drums were quite unbalanced: heavy kick and floor toms, and ride cymbal and high hats that got lost. Strange, really, when the clear glock and strings call for something so different. It’s the modern linear arrays that I like: I’ve heard some lovely PAs like this with power and also detail and a crystalline, clear sound. This was a professional show, and impressive, but there was little audience response, and no encore, and the end came somewhat with a whimper. Sad, because this was very impressive popular music.