Venice on a Wednesday

Francesca told me that Wednesday is a good night for music in Venice. So it’s not surprising that I found Franca Pullia performing with her quintet at the local bar, Osteria Poppa in Santa Croce, where they perform each Wednesday. 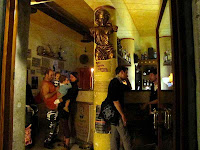 I first heard a latin tune, so expected jazz, but although there were some jazz tunes, and a clear jazz influence in the sax, this was more a pop/funk band, playing Stevie Wonder and similar worthy and popular and funky material. What’s not to like in this repertoire? The Beatles’ Come together, Nancy Sinatra’s Bang bang, an interesting mix of Fly me to the moon sandwiched by Walking on the Moon, Sonny, Higher ground, Superstition. All very popular and perfectly good entertainment to go with your beer (except perhaps for All of me, which I prefer not to think of as jazz anyway). The bass and sax and drums set a nice and steady groove, if sometimes a little rushed. The acoustic bass guitar tone was very satisfying; the keys changed to organ and clavinet as required; the drums were effective despite the small kit although I would have liked to hear the snare switched in more. I noticed that the band didn’t carry much equipment, but given transport in Venice, I’m not surprised. Franca sang in English with a good, strong voice and a lovely latin accent that said Brazil to me, although Italy is really the latin country par excellence (after all, where is Latin from if not from Rome). Aldo was sitting in for the normal sax player Guglielmo Pagnozzi, and did a great job on soprano, adding a jazz sensibility in the mix with its complexity and richness. I particularly liked his playing on the final number, Superstition, where he took the single chord and soloed in some Middle-Eastern scale that gave unexpected, unresolved tones that were a joy to my ear. 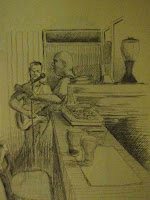 I was also pleased to meet Francesca who was sketching the band. Her daytime role is in civil engineering and preservation of buildings (she’s currently working on the Palazzo Ducale) for which there’s a real need here in Venice, of course. But she also does a good line in band sketches. I’ve included a link below to her Facebook site with more sketches of Venetian bands. This one is a finished sketch of a local blues band. The one above is Francesca's finished sketch of Franca's band playing at the Poppa. Nice one. 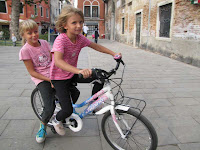 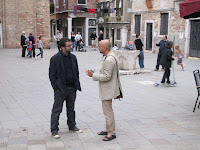 It’s been an interesting night in Venice. I enjoy the depth of cultural time here in Europe and everyone falls in love with this place. I sometimes feel the old world is a place stuck in its history and that the new world is actually where change is happening. But I’d eaten at a very good and less traditional restaurant (another local, La Zucca), found a lively bar, and enjoyed local live music: this is quite like my local Canberra experience. But the babies in the bar and the busy, familial air and mix of generations in the local Piazza di San Giacomo d’Orio seem different. So although we share many common experiences these days, there remain differences that justify travel. And despite increasing corporatisation and globalization, hopefully it may ever be.

Thank you Eric!!!!!! We hope to meet you again in Venice. I am very happy you enjoyed the concert!