A revisit from CSPR

Jim Fuller is a name from the local past. He’s a guitarist who studied in Canberra, played as a student in the early ‘90s with the likes of Craig Schneider, and recorded with the forerunner of ArtSound, Canberra Stereo Public Radio. He renewed his acquaintances last night with a Friday Night Live broadcast from brash, youthful ArtSound, playing in a trio with Lachlan Coventry and Mark Sutton. 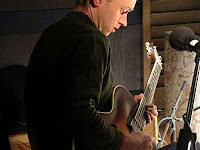 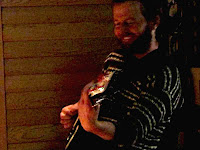 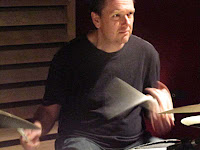 The trio was strong, with drive and energy to spare, playing a range of modern standards, and also several tunes from what must have been Jim’s formative era: from the Benders, an ‘80s Sydney outfit featuring Dale Barlow, Chris Abrahams, Lloyd Swanton and Andrew Gander. Apparently this led to the Necks, but there’s no obvious path from Benders to Necks, at least how Jim played it. Jim’s a wonderfully thoughtful player. My take was that he took melodies and reharmonised and rebuilt them, mostly spontaneously, I expect. Lachlan would hold the chordal structure, although he enjoyed dropping into pedals, and Jim’s tunes would form and reform, through chordal fills or themes that he’d develop in response but in avid contrast to the tune. Perhaps this is just modern technique, bending and reforming and reinventing the most well known tunes, but this band did it with energy and proficiency. Mark was delightful to hear: always strong, in touch, inventive and polyrhythmic in solos, and with the most sturdy of tones on kick and snare. And Lachlan was lithe and mellifluous in his plectrum soloing, finding lovely melodic lines and bursting into flurries of guitar-like speed. The Benders were a unique feature alongside more common Shorter and Monk and Montgomery. Always with verve and a harmonic sleight of hand, and that power applied to slightly unsettling modern interpretations.

I heard that Jims brother Ted thunder thumbs fuller was the musical genius and gives Jim all his tunes.

I heard that Ted thunder thumbs fuller is the actual musical genius and that he'creates all of jims tunes.