It must have been a weekend for pilgrimages. Obviously, the big one was for Mary McKillop at the Vatican, but for me it was my annual jaunt to the Moruya Jazz Festival. It’s usually a bright, sunny, warm outing, but this one started with unseasonably wet and cold weather. By the end, it was pleasant despite a gentle but cool breeze in the Monarch Beer Garden. The usual contingent from the ANU Jazz School was there, as well as lots of names that appear most years. (It’s not just a pilgrimage for me, it seems). 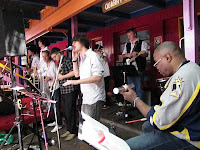 Eric Ajaye noted that this was the tenth straight year that the Commercial Ensemble played at Moruya. They were hot and one of the festival stars for me, but then I like the harmonies of a larger ensemble. It was a different band this year with Liam Budge out front with his youthful vigour and visage (and male voice) and searching approach to singing the melody, and the addition of percussion from Namchoon Kim, (who has studied in Cuba, no less) enlivened the tonality. Percussion is not a common instrument at the Jazz School. Eric Ajaye noted that many bands he’d played with in the US had percussion, and certainly it adds a patina to the sound and complexity to the rhythm that greatly enhances many musical outings, and it sat well with a funky outfit like the Commercials. They do a nice cover of Steely Dan’s Ricky don’t lose that number with constant changes of style, rock, swing in the B section. That was interesting. But my favourite was a deliciously intoned ballad which they played at the first performance only. The horn-line intonation was spot on, so this just sang, and amongst the other lively numbers, it was a big contrast. Beautiful. 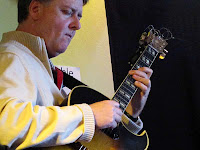 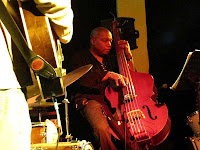 The stars of the show (at least for the followers of more modern styles) are always the faculty of the jazz school. This year it was Mike Price, Eric Ajaye and Col Hoorweg performing as the longstanding Mike Price Trio. They performed fabulously smooth and rich treatments of a few standards. How interesting were these renditions: a listening audience in a dedicated but casual venue makes a big difference. They played two sets, and both were well attended and closely followed. I was particularly taken by Eric’s strong and determined fingerboard work and I’m perplexed at the moment by that stroking right hand action, but then I’m a bassist new to double. Miro’s band was in the program, but couldn’t make it one the day, so Luke Sweeting performed Miro’s sets with Eric Ajaye and Aidan Lowe, and with some students occasionally sitting in. I caught just a few tunes, but the uncanny ability of Luke to stray from the straight line was inspirational. 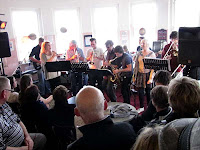 Another band that impressed and entertained was the little big band funk/reggae outfit called Mahooud. Lots of laughter and display and obvious joy on stage, and it was infectious for the audience. Rachel Lole led the band from the mic stand, interestingly with another female singer, Sophia Christoper. Six horns out front, and a strong rhythm section I particularly noticed Caleb Wearne, e-bassist (also appearing in another outfit on acoustic) who set down some eminently funky and solid rhythms on Cissy Strut and the like and guitarist Victor Rufus. There were screams of delight when funk turned to reggae at one stage, but the feature was the final polka-cum-klezma paean to drink, with indulgent lyrics and punctuated playing and starts and stops and Eurofolk changes of tempo. The band was loving it and so was the audience. This was a winner.

Otherwise, there was a font of interesting stuff. DJ Gosper with her entertaining professionalism, great voice and relaxed swing. Jan Preston with hard core boogie-woogie blues. Matt Thompson with his very cool accompaniment. Dirk, Graham and Lachlan presented their normal smooth, mellifluous sax-based performance as As Famous as the Moon. Liam Budge in his own band with emo presence and busily inventive vocals, and always a great collection of fellow travellers around him. Not sure with whom, but I remember guitarist Joe Panucci letting go with some extraverted, screaming, sweeping solos. The Recording Ensemble were more introspective and minimalist this year. The Ax Long Quintet presented some early Miles-cool playing. I was quite fascinated by some developing but intriguing soloing by Tom Fawcett. Peter Henderson’s Turner’s antidote was there as usual, playing Tom Scott and similar '70s funk. They obviously enjoy this outing. Kooky Fandango were playing their lighter funk style, sharp and practised, and with Cam Smith’s classically trained trumpet playing some very nice and authentic jazz solos. There was more, of course, some of which I saw, and some I missed, bands and even venues and they are obviously coloured by my mood and interests. After years of attending Moruya, it feels like a family affair with the assortment and affiliations and changes over the years as the kids grow up and leave home. Maybe family picnic fits better than pilgrimage.

And BTW, I was there with a new band, but I have indulged myself elsewhere about that.
Posted by Eric Pozza at 7:00 pm