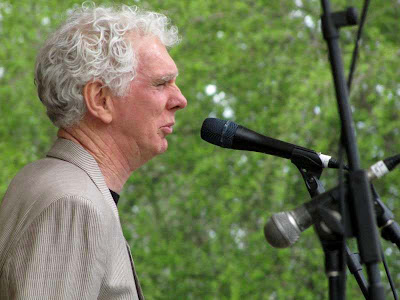 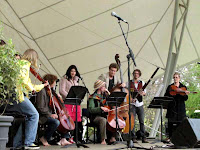 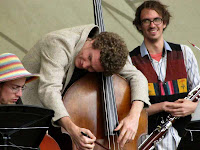 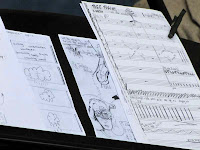 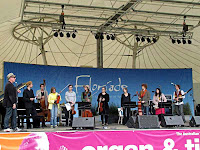 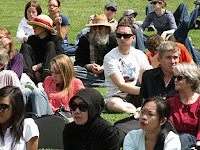 Flowers and Floriade go well with the ANU School of Music. I caught the final concert of the Rhythm & Blooms series yesterday and it was varied and grand, with Vince Jones and band as the feature and amix of classical and jazz. The School has been presenting concerts all week at lunchtimes. It's good performance practice for the students, on a big stage with a big PA, but not something a worker can get to, so no reports. But back to Vince and co.

This was an intriguing concert, given the mix. Firstly, the head of the School, Adrian Walter, is a (classical) guitarist, and he played an andante and rondo by Carulli in a duet with Bill Grose. Interestingly, this was on guitars of the period, smaller, thinner, with different pegs and quite a different, lighter tone, which I could hear near the stage, but was lost through the PA. Then Luke Sweeting performed a solo piece, and two songs with Liam Budge. Luke, of course, was his stride and substitution best; always a treat. Liam was obviously the student of his teacher, who we were to hear later, doing heartfelt You don’t know what love is, and one other standard. Then something more unexpected: The Classical School’s Contemporary Music Ensemble. Classical improvisation is a very different beast, although perhaps not so far from free jazz. There was some tail wagging here (and the ironic laughter of the players confirmed this) but also some seriously involving music. I may be too unadventurous, but my favourite was the last, with hints and echoes of a pop/folk tune that moved between the players at different pitches and tempos and confirmed the wonderful skills of the players. Other tunes were played to a poster photo of a room (!) and various abstract charts, so this was not the dots that classical players otherwise live with. Neither were the titles, such as Deconstructing decadence, Fantastical acoustical circus, Will the mosquito survive the onslaught. Enjoyable if you’re prepared for the aural challenge. Or, for that matter, was the conducting. An interesting outfit. They perform occasionally at the School. Keep a watch on the Concert program at the ANUSM website.

The second set was a long one by Vince Jones and his band with some local friends joining later. Vince was his thoughtful, concerned self, singing his songs that speak of alternative, but not new age, political themes. They are usually slow, solicitous tunes claiming social justice and questioning how injustice is allowed to be, eg, the presumably post-GST theme “Who will arrest the banksters, we’ve put up with them for too many years”. I still have the immersing, emotive rise and fall tag of The nature of power in my head. The band played with appropriate restraint while the tension sat ready to explode, but never did. Vince is like that. Vince only picked up a flugelhorn for one tune, otherwise just sang with the band of Matt McMahon, Ben Waples and Simon Barker. The outfit sat like a glove for the music. For the last few tunes, local friends, John Mackey and Miro Bukovsky joined in for some admirable solos and Miro’s superb Peace please to end. Vince’s music talks with darkness and intuition, despite the purposeful words, so to achieve such success on a sometimes-sunny spring day amongst the tulips just speaks of the authority of Vince and the band. Lovely and touching and worthy of purpose.