Bitten by the blues 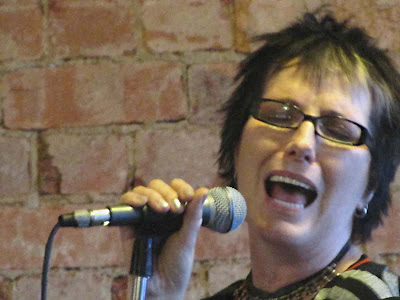 I’ve known DeeJay Gosper for ages, from the Blues Club and other locations. She keeps popping up, not least for her connections which are widespread and her business-like approach to announcing gigs. I managed to hear her current band playing at the Bite to Eat café last Sunday. It’s a gently entertaining band playing popular, blues-influenced, sometimes soft jazz material, with DeeJay’s great, emotive voice out front. I hadn’t realised just how effective was her singing, but this was a wonderfully emotive performance as she felt every word, changing volume but also vocal tone to fit the songs. Blues people do this, and I felt DeeJay’s performance was particularly effective with just an occasional use of growl and power. I was impressed: this is an authentic blues voice. She plays blues harp, too, as well as having a friendly interaction with her audience. 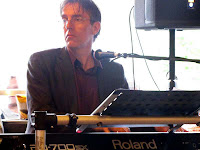 Her band included husband Michael on drums. Michael provided the sound at JU2009, so is a particular friend of CJ. Also Mike Dooley, playing left hand bass along with accompaniment and solo piano roles, and Tom Mansfield, a new member on guitar. Mike’s another good friend. I’m playing with him in one outfit (check out Gurus of Groove at Moruya this weekend). The repertoire was classic blues/pop/light jazz: very sellable but also very suitable for Sunday afternoon bars, and well received by the milling audience in Bite to Eat: Perhaps perhaps perhaps, Sway, a few blues, Route 66 with a fun twist of rhyming Routes (63/free, 65/alive, 69/fine and the like) and a few gently swinging originals. Very nice for a lazy Sunday afternoon and well received by a good-natured audience. Well done, DJ.