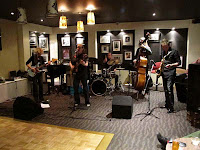 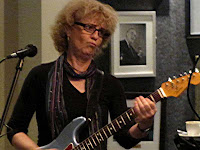 It was a busy night, with several good gigs that I just visited. Gig 1 was Fiona Boyes and Debbie Davies. Fiona is genuine hot Aussie blues singer/guitarist with significant US recognition who has recently settled in Canberra, so we can expect to hear more of her. She was playing with blues guitar master/mistress, Debbie Davies. Debbie has a string of successes with multiple albums and awards and experience playing with the blues greats. I only caught a few tunes and it was early in the night, but this was lively 12-bar blues with Fiona’s involved singing out front and some very capable guitar from Debbie. The women played with locals Niels Rosendahl, James Luke on double bass and Chris Thwaite. I presume this is the band that will play at Wangaratta this weekend. It was a lively scene with a large, busy, noisy audience. Thinking back, I wish I’d stayed for more. True blues. 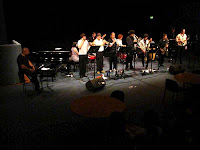 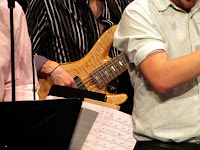 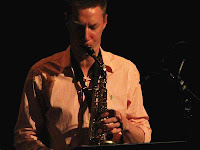 Gig 2 was the ANU Commercial Band for its final outing in the current incarnation (several significant members are leaving the School this year, and membership is by annual audition anyway). This was funky and committed, but the sedate space of the Band Room bled some of the verve and fun that I heard at Moruya in the Monarch garden a week ago. I heard again that beautiful tune I mentioned at Moruya, with lush, gently changing chord textures and a lyrical overlying melody, sometimes from alto, otherwise from trombone: Looking glass by Matt Harris. Lovely. The rest was less cerebral and more funky, from stables James Brown and Prince and others.

Gig 3 was just a listen at the door to the CSO playing Elgar’s Enigma Variations at the Llewellyn. I couldn’t really make it out, so off to more mundane matters, like Gig 4: supermarket [no pics].