On the Llewellyn stage 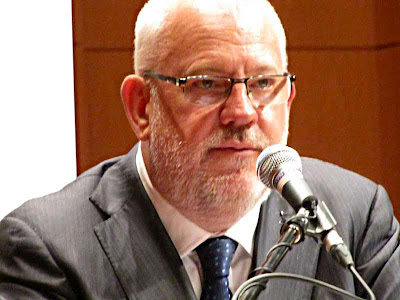 Maybe my only time on the Llewellyn stage will be to listen to Paul Grabowski give an oration. Strangely, the location was the timbered stage of Llewellyn Hall, and how big it is! Big enough for an orchestra and choir, of course, which is big. The oration was associated with his grant as an HC Coombs scholar (all praise due to Nugget Coombs) along with the Australian Art Orchestra. Paul is an insightful man, and I enjoyed listening to him, especially as he talked of his relationships with Nookah aborigines that led to the Roper River relationships that I reported here only weeks ago. I have a connection with this place around Kakadu: one of my sons did a school tour to Nookah, so it has some resonance for me. But obviously Paul’s is far more significant.

Paul introduced the talk by asking whether computers and turntables are musical. It was a point of contention in Australia during the culture wars, and the then WA premier cited his own daughter’s violin lessons as proof of the majesty of (straight) music. Paul went on to a very quick tour of European musical history, highlighting that our conception of the orchestra and classical music only arises with the tempered keyboard and the possible harmonies allowed, sometime in the C18th. Not long back. Against this, he noted that electronics have a history dating back to 1920, so ~90 years. But this was background. The essence of the talk was that music is rich and complex and speaks with complexity and with power, of the meaning of life, to all of us, and that music is key to life and must be supported, and students must be trained in understanding of this. It’s an essential.

Along the way, was a sideline on the nature of jazz, as “an utterly romantic form” and “the great night music”. It speaks to the essence of dance and procreation, and thus essentially to life, as well as being the “marrying of the intellect and passion” (this rings true to me), involved as it is with the talk of “feel” and a pulse that ignores the barline. Paul noted that you don’t talk of Chopin with words like “feel”. He didn’t go too far down this path, but he did argue for improvisation (apparently, amongst classical students, only organists still study improv) and new awarenesses in classical music such as for intonation.

But by the end, he was making great claims for music (or often, between the lines, for jazz) as power, beauty, expressing the inexpressible, and such. I can feel his passion, but this is not an uncommon argument for any number or arts and even other pursuits that are more worldly. “Music never lies” was one such claim. It’s got me thinking, but it’s a big claim. Certainly, music, both jazz and more sedate, is a thing of beauty, emotion, and even love and procreation, and thus, perhaps of power, but my guess is that it’s just one such thing. Clearly it’s nobler and more life enhancing than the baser pursuits such as for riches or footy. But there must be other enobling interests, like literature or sculpture, or further afield, like astrophysics, or even chess when played with conviction. So I can agree to some degree even if I question the extent of the claim, and I certainly value his observations of gamelan intonation and aboriginal song cycles and the like.

There’s a lot here that I haven’t recounted: passing mentions of John Cage and Stockhausen’s bakelite knobs and harmolodics and his discovery of his own voice and the importance of the gramophone in recording improvisation and the like. It was an interesting and thoughtful talk and a very different way to experience a renowned jazz musician. I hope for more such talks. Paul Grabowsky presented an ANU public lecture with the title, The Complete Musician.
Posted by Eric Pozza at 9:13 pm