Mike Price promised us no long sax solos, but then guitarists aren’t innocent creatures. Instead, we got lots of guitar solos and volume, but it was some wonderful and informative playing from a front line of three guitars (jazz Doobies?): Mike with two ex-students, Carl Dewhurst and Carl Morgan. They were supported by Eric Ajaye and Mark Sutton who took some lovely solos at the end, but this was a guitar night and it was educational. Mike and the two Carls took us on a tour of guitar styles from Charlie Christian to current. The names are all quite well known, and even the styles, but hearing them together always clarifies the mind. It was the same with the playing. Hearing these three guitarists together was an ear-opener, making evident the different styles and habits and approaches of each player. So this was a fascinating and satisfying night out. 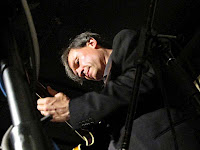 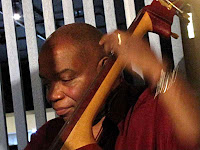 Firstly, the history. Charlie Christian: born 1916; played with Benny Goodman; died aged 25; first major amplified guitarist, allowing him to switch from rhythm guitar to soloist; played a Gibson 125 (no cutaway) with a single coil pickup; mate of T-Bone Walker, the revolutionary blues guitarist. The Crazies played 7 come 11, a 32-bar tune with cut time A section and swinging bridge. Wes Montgomery: started playing guitar at 19; died aged 46; fluent style using flesh of thumb (no plectrum), block chords and octaves. [I’ll add that he had an early electric bass-playing brother, Monk Montgomery]. The Crazies played a common Wes standard, Full house. George Benson: Wes M protégé who later moved into pop; again octaves, chords, thumb styles; first guitarist to play with Miles; influenced by an early career in R&B and soul. The Crazies played Thunderwalk, a hard-swinging blues with that moves up a semitone on bar 5. Antonio Carlos Jobim: the great bossa composer. The Crazies played the languid Triste. Pat Martino: born 1944 in Philadelphia; influenced by Coltrane; played with chromatics, lots of notes and passion, lower register playing, chord hits; suffered a brain aneurism in 1936, was operated on and lost all memory including how to play the guitar then re-learnt from his old recordings; still playing. The Crazies played 3 bass hit.

History set 2. Steve Swallow: bassist. The Crazies played Falling grace, a complex tune that was apparently his second composition. Not sure how this got in, given Steve S is a bassist, but he does play electric. Kurt Rosenwinkel: god of a new generation of guitarists; born Philadelphia; left studies to tour with drummer Paul Motion. The Crazies played Zhivago in 3/4. Pat Metheny: born 1954 in Kansas; plays with effects, chorus, reverb; melodic playing influenced more by pop than blues; creator of “New Americana” with Bill Frisell. The Crazies played a lovely waltz from the classic album that he recorded at age 21, Bright Side Life. John Scofield: born 1952; blues-funk player who’s passed through several stages; renowned soloist who’s played widely. The Crazies played a gentle, lyrical tune with multiple guitars and no bass or drums, The Beatles, which Mike noted had “certainly nothing to do with the Beatles”. Jim Hall: born 1930; one of the all round great jazz guitarists; a melodic chord player. The Crazies played a driving groove tune with great bass which was originally recorded with Bill Frisell on the album, Dialogs.

Secondly, the guitarists. It’s instructive that you can have a teacher with students but three such different styles. To me, they sound this way: Mike is bluesy, sometimes scalar but relatively arpeggiated. Carl M is flowing, scalar, sweeter and consistently faster than the other two. Carl D is hard, angular, unexpected with diverse intervals and lines searching for resolution, not always fast but sometimes blistering. A fascinating experience to hear them together. What a great night! Education and entertainment and enlightenment. I certainly learnt about the jazz guitar. I’d known of all the historical guitarists, but one just as a name, and even then hadn’t put them together, especially the earlier ones. At one stage Carl D excused the three of them for their guitar passions, but I say give us more. Much enjoyed.