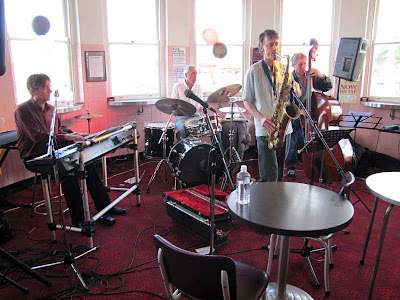 I enjoyed Moruya as the first outing for one of my bands. It’s primarily formed as a cabaret-jazz outfit, but the singer was not available so it was modernish-mainstream, slightly latin, sometimes smooth jazz that we played, mainly originals, but also a few standards. The others all have some tertiary music education behind them: two with time at the Sydney Con, and one with a single study at Adelaide’s Elder con. I’m the unformed one who’s largely self-taught. Mike wrote most of the music, and I provided a few, including one that got some compositional repairs from Mike. The first set was decent but less comfortable and the second was sitting better, with some good soloing all round and more time to relax. It was good to be out. The non-originals were Out of nowhere, which is just plain beautiful, Joe Henderson’s Inner urge and All the things you are. I heard Things… done several times at Moruya, mostly in 4/4; Mike Price did it in 3/4; we did it with descending time signatures 7/4-6/4-5/4-4/4 and it was a counting challenge. It inevitably reminded the band of the joke about the musician counting in a very square waltz: “1-2-3-and”. The originals were varied: Mike’s were a gently funky film theme called Blue funk, a mysterious Arabic-sounding piece called Al Hallij=Across the gulf, a bebop called Be-Bopped, a latin with a devilish unison line called Tortillas in Heaven, a Chopin flourish as intro (Fantaisie Impromptu) that resolves into Night in Tunisia and then uses a Chopin line as melody called Fred meets Bud. Mine were a Wanderlust-inspired samba called Sambala and my creepy piece with vertical melody, Snakes alive. I did say varied. The Gurus appear in their Cabaret incarnation as The Gossips over the next month or so.