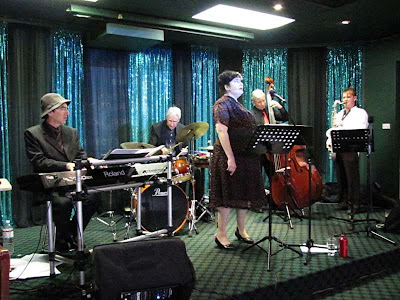 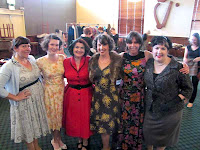 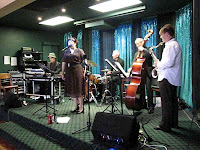 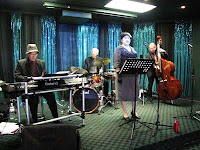 It was pretty much a ladies’ day: a clothing exchange called We’ll wear again to raise funds for Frocktober and the Ovarian Cancer Research Fund. Certainly, the audience was mostly female, but at least there were a few guys, even if they were mostly in the band. Not sure if we entertained the women as much as the second-hand clothes did (I jest; we did perfectly well), but we got a few claps and it was a very enjoyable, 40s-era theme and it was the Irish Club so there was Guinness on tap. James LeFevre helped out on tenor with some authentic bluesy growls and Lester style appropriate to the gig. I am a bit closer to a decent amplified double bass sound, so I was enjoying it. Leanne was the dignified but entertaining front person that a Darling Sister must be. Brenton played some of his best solos: busy but still relaxed, tumbling rolls and fills. Mike was sniffelling a cold but pulled through another impressive, professional performance. And I found myself a perfectly nice shirt: the grrrls can’t have it all their own way. 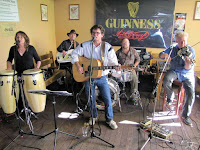 I just caught another band on the Irish Club deck playing Pogues and more traditional Irish music: Humbug. Here’s a pic. I haven’t written up Irish music, although their fiddle reels and the like can be insinuating and entertaining.

The Gossips are Leanne Dempsey (vocals), Mike Dooley (piano), Eric Pozza (bass) and Brenton Holmes (drums). Saxist Richard Manderson was not available on the day, so James LeFevre (tenor) sat in. Thanks James.
Posted by Eric Pozza at 6:19 pm

The music was so good Eric and definitely complimented the clothes. So nice to have live music at an event such as this!