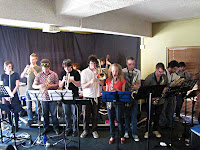 The ANU Recording Ensemble is a favourite of mine and I was excited that they could perform. It’s not always easy to get such a large ensemble together. They had to squeeze on the Lowe/Milman stage (so named because drummer Aidan Lowe and bassist Simon Milman played virtually every set on this stage). I missed most of this set, but what snippets I heard seemed more minimalist and expressionist than I had heard from them before. 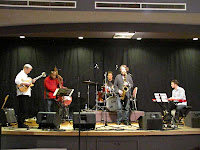 Utopia Collective was to feature excellent Sydney bassist, Jonathon Zwartz, but a software glitch at Virgin Blue ticketing detained him. Eric Ajaye sat in and did an excellent job, of course. I was to observe later just how different were the styles of these two wonderful bassists. Possibly because of the changed bass seat, Utopia played a more standards-based set than usual, although with its funky fusion soul always on show. This is steaming, ecstatic, extroverted music played by a supremely competent set of players: long solos, screaming guitars, speed and unapologetic excitement. Great playing and great fun. 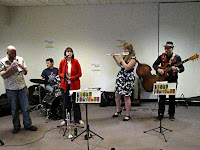 Mates and JU committee members featured in Kooky Fandango. Cam Smith and Courtney Stark were on the committee for JU2009, and Cam was on again this year. This is a collection of mates (Sarah Nielsen sitting in for this performance) playing gentle funky tunes with a touch of blues, and interestingly without a chordal instrument other than Peter Barta’s 6-string bass. An unusual and gently funky approach. 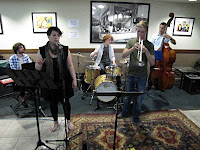 It’s inevitable that you can’t catch everything when there are multiple stages. I caught just a few bars of Alex Raupach’s band, enough for a pic, but I remember them from an ArtSound broadcast. The outfit is a vehicle for Alex’s lyrical originals, where brass is wonderfully matched to Rachael Thoms’ lyric soprano voice. 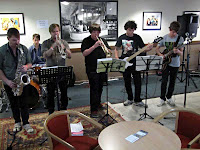 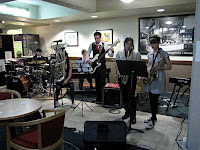 In the meantime, a few school bands appeared on the Blackboard stage. Here are a few pics. 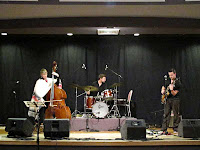 It’s getting later in the day by now, and we are starting to see some of the visitors. Firstly, the Hauptmann Trio. Zoe, Ben and James Hauptmann are well known in Sydney and equally known here in Canberra as local products. They are very well respected in various fields, but often seem to exude a feel of rock or blues or country that has obviously informed their playing. It’s an attractive and infectious sound. Here, in the family trio, Ben seemed to lead with his guitar defining so much of the melody and feel and providing the patter on stage. But the grooves were strong and steady (there’s an authority in the grooves from both Zoe and James) and Ben’s playing was looped and effected and his solos were rock hard and overdrive-screaming. I have enough rock background to love such indulgence! And the choice of Moon River for one of their reworkings was memorable. It’s such a lovely, sentimental tune. 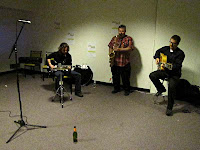 As Famous as the Moon appeared without drums for this incarnation, playing as a trio of tenor, guitar and bass guitar. AFATM is perhaps the premier smooth jazz outfit around Canberra. I’ve played a few gigs with them and enjoyed them immensely. This outfit is so mature and easy going and liquid and well versed. This is one for the cocktail hours: smooth but in no way lacking in purpose or beauty or seriousness.
Posted by Eric Pozza at 8:16 pm